The members of this genus are commonly called mushrooms. Mushrooms grow on soil. They are abundantly found on soil with decry plant material and moisture. The specie ,4garietts campsites is very common. This species is edible. It is cult hated for commercial purposes.

The mature plant body is composed of two parts: vegetative mycelium and sporophores

(a)   Primary gills: The gills Nshich run through the whole length of the pilaus flout stipe to margin of pilaus are called primary gill.

The stipe has ring like structure below pileus. It is called annulus. The stalk and upper surface of pileus has white colour. But the lower surface is black in colour.

Asexual reproduction is rare in Agarkus. It may occur in some species by chlamydospores formation. 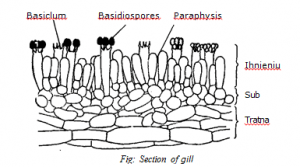 gills or lamella of fungi

Sporophore is the reproductive structure. The gills of sporophore have following structure.

I. Tram: The central part of gill is called trama. The hyphae are compact in the trama. These hyphae are arranged longitudinally to tin long axis of gills.

compactly to form hymenium. Hymenium are present on both surfaces of the gills. Inner layer of hymenium is called sub­ktmenium. Hyphae radiate outwards to form sub-hymenial layer on both sides. The tips of this layer develop basidia. Each basidium develops 2-4 sterigmata. Basidiospores are borne on st?rigniata.

3. P traphyses: Some basidia like structure are present between knelthim. These structures are called paraphyses.

For nation of basidiospores: The cells which give rise to basidia are nultinucleate. But they become binucleate by the disintegration of cther nuclei. The two nuclei fuse to form zygote nucleus. The zygote nucleus undergoes meiosis. It forms four haploid nuclei. Stertgmata are produced at the tip of basidium. Sterigmata develop basidiospores at the tip of sterigmata. Each nucleus migrates into the each spore. Some species form two but some forms four basiliospores. The nucleus of basidiospore divides mitotically. Thus basiliospores are multinucleate. Mature spores are oval. They are dark in colour. It makes the gill black in colour. Basidiospores are disc’iarged from the sterigmata.

Germination of basidiospores: The spores germinate to produce mycelium in the soil. Mycelium grows continuously in favourable conditions for several years. The hyphae fuse at some points and exct ange nuclei. The hyphae are septate. Its cells are multinucleate. The hyphae may be free from each other. Sometimes, these hyphae join to form rope like structure called rhizomorphs.