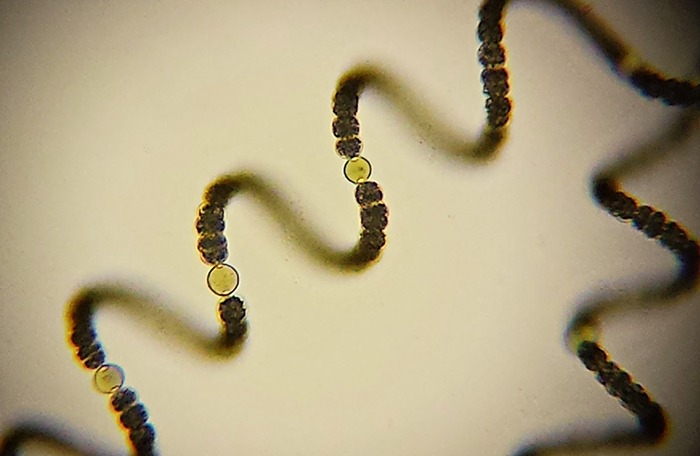 Anabaena (Gr. Anabaniein=to arise) is a filamentous blue green alga. The genus contains both planktonic species and some that form coatings on other aquatic vegetation. A few species are endophytic and grow in cavities between the leaves of the water fern Azolla and roots of the cycads. It is widespread in bodies of fresh and salt waters. It occurs frequently as dominant organism in water blooms. Anabaena species are characterized by presence of heterocysts and akinetes in their filaments.

The thallus comprises of unbranched filaments in which the cells are joined end to end. The filaments arise as a result of restriction of cell divisions to only one direction A single row of the cells in a filamentous colony is a trichome. A filament may contain one or more trichome are thick walled and modified into akinetes and heterocysts. Movements of the filament by waving of the terminal portion of a trichome have been reported.

The vegetative cell is prokaryotic and is characterized by absence of membrane-bound plastids, nuclei, large central vacuole, mitochondria, Golgi apparatus and endoplasmic reticulum.

The protoplast is surrounded by cell wall formed of amino acid peptides.

The chromplasm contains flattened sacs, thylakiods, in which the photosynthetic pigments are located. The thylakoids are not segregated from cytoplasm by a membrane. The photosynthetic pigments are characteristics phycobilins (phycocynanin and phycoerythrin), chlorophyll a and carotenoids. The phycobilins are present on the outer surface of thylakoids. A number of small spherical granules rich in carbohydrates are distributed in the chromoplasms. These are called cyanophycean starch. The reserve food is stored in proteinaceous bodies, the cyanophycean granules.

The central body is nuclear in nature. It is nucleus without nucleoli and a definite membrane. The nuclear material is often dispersed in the form of a network.

Pseudovacuoles or gas vacuolesare found in Anabaena cells. These are gas- filled cavities that provide buoyancy and help the alga to arise to the surface of the water. They also reduce the intensity of light reaching thylakoids.

A heterocyst (Gr. heteros = different + kystis = cell) is a specialize cell that differs from vegetative cell in structure of its wall and transparent contents. It arises by transformation of a vegetative cell. The cell enlarges synthesizes a three-layered peripheral wall in addition to original wall, the granular cellular contents decrease and thylakoids reorganize into concentric or reticulate pattern during transformation. There are called polar nodules. The heterocysts make cytoplasmic connections with adjacent cell through these pores. However, in mature heterocyts these pores get filled.

Heterocysts are sites of nitrogen fixation and transfer of combined nitrogen to vegetative cells between intervening heterocycts. Also, there is evidence that they are concerned with transformation of vegetative cells adjacent to them into akinetes. In some species, the heterocysts act as reproductive structures.

Akinetes (Gr. Akinesia=absence of motility) are non-motile spores formed by transformation of a vegetative cell. A vegetative cell enlarges, accumulates cyanophycean granules and the original cell wall becomes thickened. The thylakoids retain the original arrangement. The akinetes are resistance to environmental adversities and germinate to give rise to new filaments on return of conditions favorable for growth. The akinetes are formed next to heterocycts. 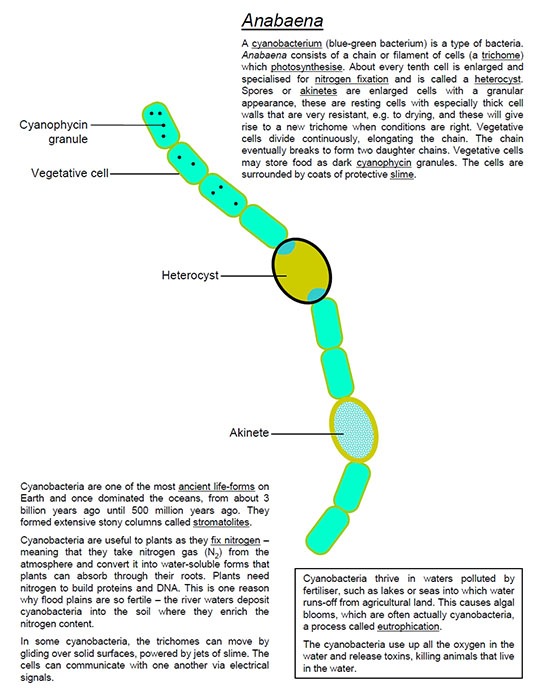 plant Body and Structure of Anabaena

The vegetative multiplication of filament takes place by a type of fragmentation called hormogonium formation (Gr. hormos = chain = +gonos = reproductive structure). In this process the chain of cells break into multicellular filaments. It is due to death of one or more cells in the trichome. In some cases, the trichome fragments at heterocysts. The hormogonia are usually motile and capable of forming new tricomes.

Asexual reproduction by spore is by akinete formation and endospores, In some cases, heterocyst also acts as reproductive structure.

The akinete germinates into a new filament. The protoplast of the akinete undergoes transverse division and moves through ruptured spore wall to form a filament.

In some species, e.g., Anabaena cicadae, the heterocyst contents divide to form small spores, the endosperms, which give rise to new filaments upon germination.

In some cases, the protoplast of the heterocyst divides to form a number of small endospores. These spores are released by rupture in the wall, secrete a thick wall and undergo a period of rest. Each endospore germinates into a new filament by cell division.

Anabaena Colony and a Singular Anabaena

The economic aspects of Anabaena include:

Increase in Fertility of Soil and Crop Yield: Anabaena spp. are grown in nee fields to increase the fertility of the soil and promotes yield of rice crop.

Reclamation of Saline Soils: Anabaena is grown in saline soils where they form thick mats on the soil surface and help in reducing the pH of the soil and increasing water holding capacity of these soils.

Water Blooms: Anabaena forms water blooms in storage water and impart unpleasant smell as a result the water becomes unfit for human consumption doe to presence of suspended organic matter in it.