The monosomics lack a complete chromosome and this create genetic imbalance as the expression of only one allele at each locus of the chromosomes is inadequate. The expression of a genetic information during early development is very delicately regulated because a sensitive equilibrium of gene product is required to ensure normal development. Due to loss of one chromosome in a monosomic, this equilibrium is not achieved, therefore, monosomy is not tolerated in diploids. But this requirement does not appear to be important in plants.

In animals monosomy for one of the sex chromosome is fairly common, e.g., XO individuals in Drosophila have a normal appearance but are sterile males, but monosomy for one of the autosome is not tolerated in animals, e.g., in Drosophila, loss of chromosome 4, results in slow development of the individual, a reduced body size and an impaired viability, while the loss of autosome 2 or 3 is lethal, because such flies never recover.

In plants, monosomy has been observed in Maize, Tobacco, the evening primrose Oenothera, and the weed Datura. Such monosomic plants are usually less viable than their diploid derivatives. The monosomics can easily be produced in ployploids. A polyploid has several chromosomes of same type, and therefore, the loss can be easily tolerated.

The addition of an extra chromosome produce somewhat more viable individuals in animals and plants, than does the loss of a chromosome. As in monosomy, the sex chromosome variations of trisomic type has a less dramatic effect on the phenotype than autosomal variations. Drosophilla females with three X chromosomes and a normal complement of autosomes (3X : 2A) may be fertile but less viable than normal 2X : 2A females. 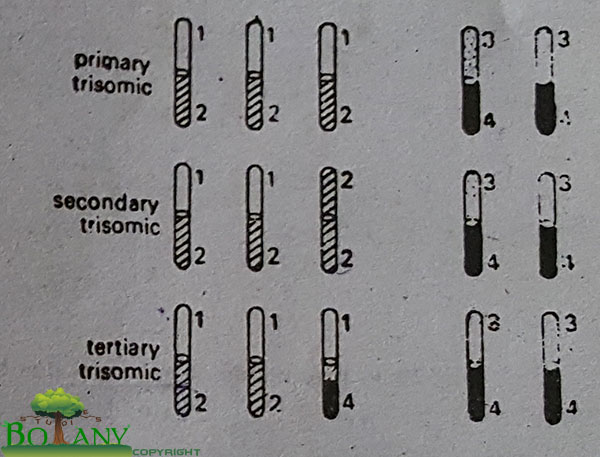 The trisomy may originate spontaneously due to production of n – 1 type of gametes due to non-disjunction of a bivalent. The trisomics are more often produced artificially by selfing triploids or by crossing triploid females with diploid males (3X x 2X). In plants and animals the trisomy may be detected during cytological observation of meiosis. Since three copies of a chromosome are present, pairing configurations are different. In some cases, only two of these three homologues may synapse. At various regions different members of the trio maybe paired and are known as Trivalents. In some cases, one bivalent and one univalent (unpaired chromosome) may be present. The trivalent is usually arranged on the spindle so that during anaphase one member moves to one pole, and two go to the opposite pole.

Trisomics are used to locate genes on specific chromosomes. If a particular gene is located on the chromosome involved in trisomy, segregation in the progeny of this trisomic will not follow Mendelian pattern, but the ratio will deviate from normal 3 : 1 and 1 : 1 test cross ratios.

Down Syndrome: In human beings, trisomy for certain chromosomes causes definite morphological abnormalities. Mongolism (Down’s syndrome) is one of them. The monogolism is common in children and is characterized by mental retardation, a short body, swollen tongue and eyelid folds resembling Mongols. Down’s syndrome is due to trisomy of chromosome number 21. The trisomics among the humans are the only trisomics with a higher survival rate. 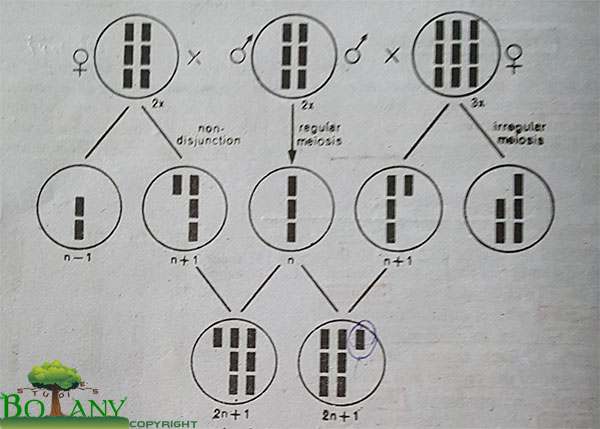 Fig: 1.2: Production of trisomics due to formation of n + 1 type of gametes in diploid (2x) and triploid (3x) individuals.

Aneuploid conditions Aneuploidy Anueploid Down syndrome Types of aneuploidy What causes aneuploidy What does aneuploidy mean What is aneuploidy 2018-07-25
admin
Previous: Chromosomal Abnormalities – Numerical Changes In Chromosomes
Next: Detailed Study of Euploidy In Genetics And Differentiate Haploid and Monoploid