Angiosperm Embryo Sac and its Types 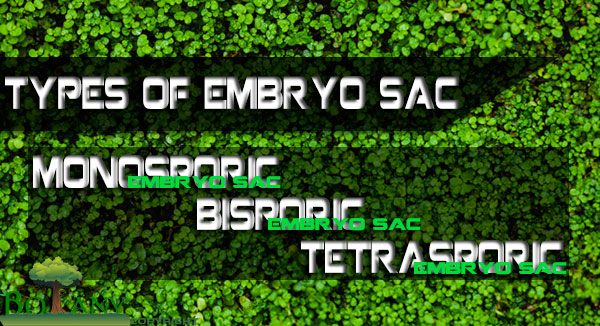 The monosporic is the first type of angiopserm embryo sac. This type of embryo sac may be 4-nucleate or 8-nucleate.

Oenothera Type Embryo Sac: It is the characteristics of the family Onagraceae. The megaspore nucleus divides twice and produces four nuclei at the micropylar end. Three of them act as Egg Apparatus while the fourth one is the Polar Nucleus. The second polar nucleus and the antipodal nuclei are absent.

The second type of angiosperm embryo sac is bisoporic. They are 8-nucleate.

Allium Type Embryo Sac: In this type, after the first division, one of the dyad degenerates, the other dyad forms eight nuclei by successive divisions. The mature sac has eight nuclei which are arranged in the same manner as in Polygonum Type. This type is usually found in Liliaceae, Amuryllidaceae and Orchidaceae, but is less common in dicots.

Endymion Type: After the formation of dyad, the lower cell may disintegrate or its nucleus divides once or twice producing four nuclei.

While the third type of angiosperm embryo sac is tetrasporic. Total eight types are known. In these types, protoplasts of all four megaspores build together the embryo sac. The number of nuclei in the embryo sac varies from 4-16.

Peperomia Type: Each of four megaspores nuclei divides twice forming 16 nuclei which are uniformly distributed along the periphery of the embryo sac. Two nuclei at the micropylar end form an egg and a synergid.

Eight of them fuse to form Secondary Nucleus, while the remaining six remain at the periphery of the embryo sac.

Penaea Type: In this type the 16 nuclei are arranged in quarters, one at each end of the embryo sac and two at the sides. Three nuclei of each quarter become cells while the fourth one moves towards the center and act as Polar Nucleus.

Therefore, there are four triads and four polar nuclei. One cell of the micropylar triad as the Egg, and is the only functional cell.

Drusa Type: The nucleus of the megaspore mother cell divides meiotically producing four nuclei. One daughter nucleus moves towards the micropylar end while the other three moves towards chalazal end.

Chrysanthemum cinerariafolium Type: The four megaspore nuclei show 1+2+1 arrangement, i.e., one nucleus lie at each pole and the two in the center. Megaspore nucleus at micropylar end divides twice forming four nuclei. The nucleus present at the chalazal end shows no regular division. The embryo sac may have 6, 9 or 10 nuclei.

Plumbagella Type (8-Nucleate): The four megaspore nuclei show 1+3 arrangement, i.e., one nucleus at the micropylar end and the three nuclei at the chalazal end.

One nucleus from each end migrates to the center and fuse to form tetraploid Secondary Nucleus (4n). The nucleus at the micropylar end forms the Egg while the triploid nucleus at the chalazal end forms a single Antipodal Cell.

Plumbago Type: The four megaspore nuclei arrange themselves crosswise, i.e., one at the micropyle, one at the chalazal, one at the right side and one at the left side of the embryo sac.

The nuclei diide and eight nuclei are formed arranged in four pairs. One nucleus from each pair migrate to the center and fuse to form tetraploid (4n) Secondary Nucleus. One nucleus at the micropylar end forms the Egg, while the remaining three nuclei degenerate.

Adoxa Type (8-Nucleate): Four megaspore nuclei divide to form eight nuclei. Three arrange themselves at the micropylar end and form the Egg Apparatus. The other three are arranged at the chalazal end and form the antipodal cells while the remaining two are the polar nuclei.