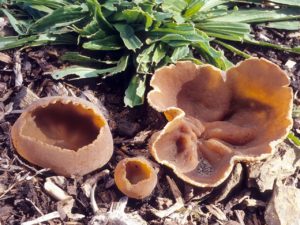 Penicillium is a common mold. It is found on different substrata. It is most commonly found on citrus and other fruits. It is also found on f000stuffs, jellies, old leather, and paper and in the soil. Pencillium is used for the production of certain acids like fumaric, citric, oxalic. and Gallic acids. It is also used in the production of cheese. First antibiotic was obtained from Penicillium notatum. 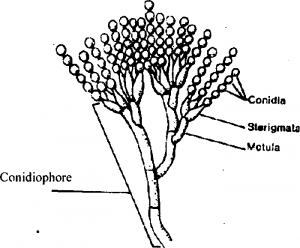 The colonies of Penicillium are bluish green. This colour i3 due to colour of conidia. Vegetative mycelium is hyaline. Mycelium consists of branched septate hyphae. Sometimes, mycelium )ecomes comaact to form Sclerotium. Each cell has many nuclei. The septa have perforations for passage of cytoplasm. The vegetative hyphae grow in the substratum or on its surface.

Asexual reproduction takes place by conidia. Conidia are globose or ovo:d. They have smooth surface. The colour of conidia is from green to blue. The conidiophores are erect. They are branched like a brocm. The number of branches varies in different species.

Formation of conidia: Each sterigma is a tminucleate sLructure. Their nucleus divides into two during the production of conidia. One dath,hter nucleus with some cytoplasm migrates into th ; tip of sterigma. The apex of sterigma swells. A cross wall cut off this apicil portion of the sterigma from the rest of the sterigam. The protoplast of this separated portion contract. It secretes a wall. This process is repeated several times. Thus a chain of conidia is produced at the tip of each Stcrigma. The conidia are held together by he parent wall. This w all breaks and releases the conidia. The

production of conidia is endogenous. Each newly formed conidium is uninucleate. But later on this nucleus divides. It makes the conidium multinucleate. The conidia fall on a suitable substrate. It procuces hypha directly. Conidia give bluish green colour to colony. Sexual Reproduction

Sex organs are developed on the tips of certain hyphae. Penicllium may be homothallic or heterothallic.

(a)     Ascogonium: The female sex organ is ascogonium. Ascogonium ‘s an elongated club shaped structure. It is uninucleate in the beginning. But its nucleus divides and it becomes multinucleate.

The mature ascogonium divides into a number of binucleue cells. Each cell gives rise to one or more ascogenous hyphae. A sterile hyphae grows from the mycelium. It encloses the sex organs to form perilium. Thus a characteristic rounded fruit body cleistothecium is formed.

Nuclear fusion takes place in the terminal cells of the ascogenous hyplia. Ascogenous hyphae give rise to globose asci. Ascogenous hyphae directly functions as ascus mother cells. Fusion nucleus divides thrice. First division is meiotic. Thus eight nuclei are formed. Each nucleus changes into ascospores. The asci are irregularly scabered within the cleistothecium. The ascus has eight ascospores. The ascus wall breaks and releases the ascospores within the fruiting body. The ascospores are smooth. Sometimes, they have various types of ornamentations on the wall. The wall of cleistothecium breaks and release ascospores.