Batrachospermum is fresh water alga. It is found in clear, cool and running streams. Deep water plants are dark violet or reddish in colour. But the shallow water species are olive green. The intensity of light changes the colour of pigments. The thallus is attached to the substratum. 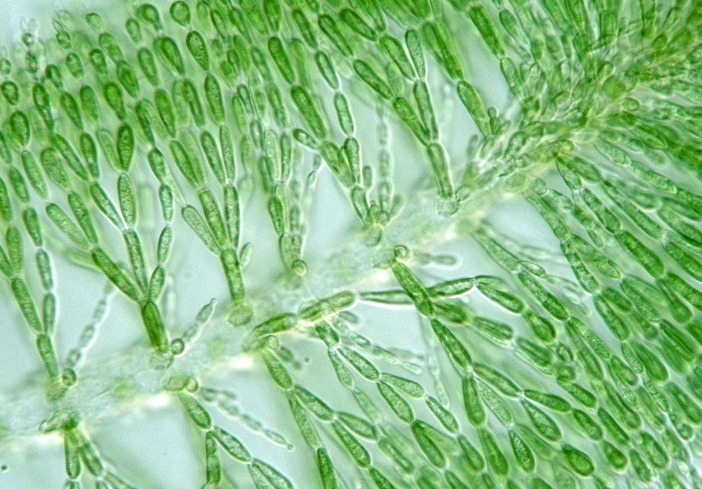 Tha:lus of adult plant is soft, thick, filamentous. It is freely branched and gelatinous. The central axis is made up of single row of large celk. Whorls of branches of limited growth are developed on this axis. These branches are filamentous and dichotomously arranged. The main axis is corticated. It consists of a row of elongated cylindrical cells. It is differentiated into nodes and intemodes. There are two types of branches arise from the nodes:

a)        Branches of limited growth: These arise in whorls from the

nodes. These grow for sometime, and then these end in long hairs. Their cells arranged like beads. All of the branches of a whorl are equal in length. Therefore, they form globose etructure ;al led glomerule.

b)        Branches of unlimited growth: These branches arise from the

The cells are uninucleate. Their cell’, are °minded by two layered cell walls. Outer layer is composed of pectic compounds and inner layer is composed of cellulose. Pit connections are present between cells. Cell has many irregular chromatophores. Its pigments are phroerythrin, phycocyanin, and other photosynthetic pigments like chlorophyll a, chlorophyll b, Carotene and Xanthophyll. Each chrcmatophore has single pyrenoid. The central cells of the axis are connected by cytoplasmic connection. Reserved food irn terial is floedean starch. 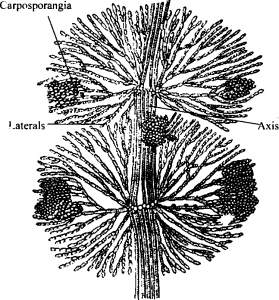 I. Formation of branches of limited growth: Growth ;n main clament occurs by apical single cell. Transverse division occurs in the cell. It cut off cells towards the posterior side. Each of these czils cuts off of four small cells. These cells become initials for the side branches. These initials divide manv times. Coster of small branches arises form these groups of lateral cells. It gives the plant beaded pattern. Each cluster of side branch •s called glomerule. These branches produce whorls.