Biodiversity Measurement in Relation to Diversity of Ecological Function 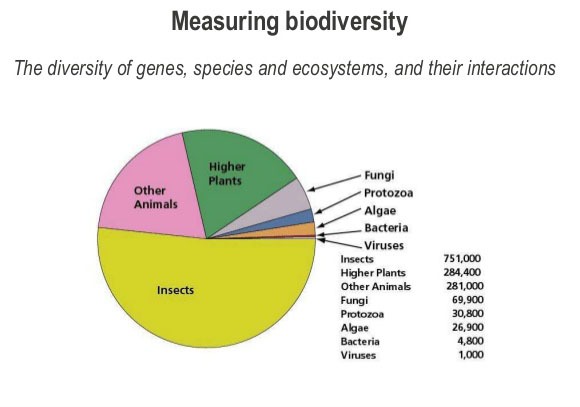 All the forms mean biodiversity including plants, animals, fungi, invertebrate, bacteria and level of organization refers to the diversity of gene, ecosystem as well as species. The wild life society (1993) define biodiversity:

The richness abundance and variability of plants and animals, species, communities and their ecological process that link them with one another with soil, air and water.

There are three types of biodiversity:

Gamma Diversity: The diversity which is on original basis explaining difference among similar habitats. 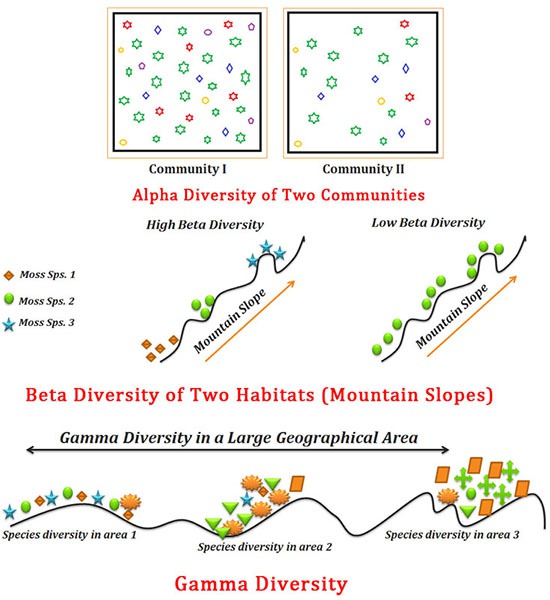 The diversity of ecological function is enormous. Millions of species of earth interact with one another species through ecological process such as competition, parasitism, predation, mutualism etc.

Every species interacts with its physical environment through process that exchange energy and elements between living and non-living world such as biotic and abiotic factor. Such as photosynthesis, biogeochemical cycle and respiration. All these fictional interactions must total billions. The Diversity of Evolutionary Function is even more complex. It includes all ecological process because they are key elements of natural selection plus process such as genetic mutation.

Functional Diversity is clearly important. For example, management plan designed to keep a species from a becoming extinct will almost fail in long run unless the process of evolution specially natural selection, continuously allowing the species to adopt the changing environment.

Biodiversity can be measured by following steps.

The qualitative description of species including number of elements of biodiversity (usually number of species) is called species richness.

Percentage Cover: The proportion of each quadrate occupied by the species is called percentage cover.

Population Density: No, of individual per quadrate is called population density.

Species Frequency: Population of quadrate with a species in it. When both species richness and species evenness increases the biodiversity also increases.

Both have the same richness (6 species), but field b has greater evenness. So, field b is more diverse. A high value of D is good and means that b habitat is diverse, species rich and able withstand some environmental impact.

A low value for D is poor and means that habitat is low in species so a small change to the environment e.g., pollution would have a serious impact.

Diversity can be calculated by Simpson’s Index

n = no. of individuals

N = Total no. of individuals

2017-09-07
admin
Previous: Regulation of Gene Expression In Eukaryotes
Next: Plant Kingdom Classification And Their Drawbacks