Cell wall is present only in plant cells. Cell wall is non-protoplasmic. It is considered as metabolic byproduct of the protoplast. Cell wall provides support and protection to cell. It also plays an important role in absorption, translocation and secretion. Cell wall is divided into different layers. Cell twills vary greatly in composition and morphology. It is composed of different layers:

Each cell has its own cell .ts all. The cell wall of the adjacent cells is joined by middle lamella. Middle lamella is a thin layer. Cellulose is absent in it. It is mainly composed of pectic compounds. Middle lamella can be dissolved by applying certain chemicals. It separates the cells. This process is called maceration. Middle lamella acts as an intercellular substance. It holds the cell together.

Primary wall is elastic and transparent. It is the first wall formed in the developing cell. It remians primary in many types of mature cells. It is present only in the living cells like meristems and other living tissues. But it is absent in non-living cells like tracheids, sclerenchyma etc. Primary wall undergoes extensive growth with the increase in size of cell. It is chiefly formed of cellulose and hemicelluloses and pectic material. The increase of thickness of primary layer occurs due to deposition of successive layers of cellulose towards the inner side of the cell. Lignin is deposited between the primary wall and middle lamella in mature tissues. Therefore, primary wall cannot be differentiated from the middle lamella. The primary naIl or many cells has lamellae like structures called tnicrofibrils These microtibrils are arranged in eriss cross manner. 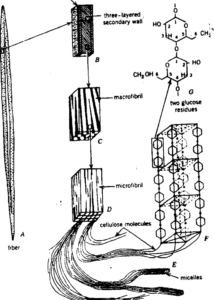 I. Annular: These are ring like thickening. In this case, ring of lignin are deposited one above the other.