Chlamydomonas is fresh water free swimming alga. Many species occur in waters having, high content of organic matter. It is frequently found in standing water and ponds, ditches, pools, rain water and in damp soil. 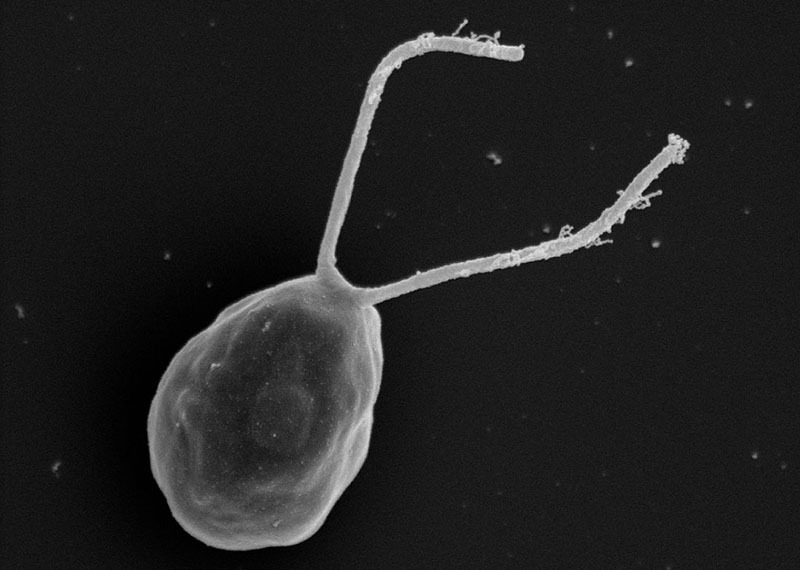 The plant body is thallus, which consist of single biflagellated cell. It is about 10-30 micron in length. It is usually oval or oblong in shape. The cell organelles are mitochondria, dictyosomes, endoplasmic reticulum, ribosome and nuromotor apparatus. It has the following main demarcations.

The protoplast is covered by a distinct cell wall. The cell wall is thin and transparent. It is cellulose in nature, but some species also contain hemicelluloses, hydroxyproline-rich glycoproteins.

There are two contractile vacuoles situated in the cytoplasm at her anterior end of the cell, near the base of flagellum. These contract alternatively to expel water. Its main function is osmoregulatory.

There is a cup shaped chloroplast is present in the cell. It is a sac like structure enclosing a granular matrix called stroma. It contains the chlorophyll pigments. A Pyrenoid is also present in the cell wall. The reserve food material is starch.

Each cell has a single eyespot towards the outer face. It is red in color. The main function of the eye spot to detect the direction and intensity of the light

The protoplasm is provided with two long, whip like flagella. They are of whiplash type with a 9+2 arrangement of the component fibrils. They are locomotary organ and the energy for locomotion is derived from ATP.

The single nucleus is located centrally, near the anterior end. It is embedded in the cytoplasm that fill in the hollow of chloroplast cup. The nucleus has a distinct nucleolus. 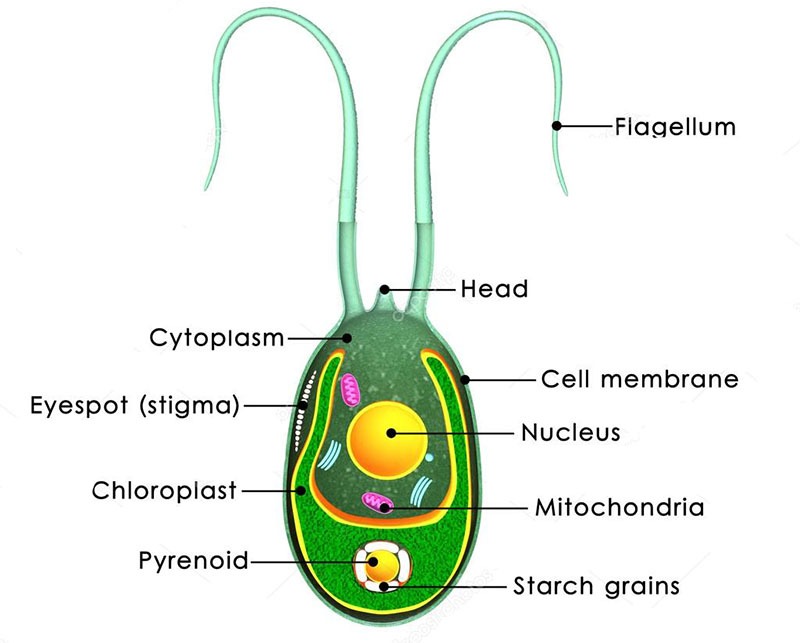 Under unsuitable conditions the motile cell come to rest and loses flagella. The protoplast divides into 4-8 cells and fail to develop flagella and fail to escape. They remain together in the parent cell wall which become mucilaginous and swell up. Each daughter cell continually divided and a colony of considerable size contain numerous cells embedded in common mucilage. This assembly of cell is known as palmella stage. When condition become suitable the cell become motile and escape from the mucilage and grow to the parent size. 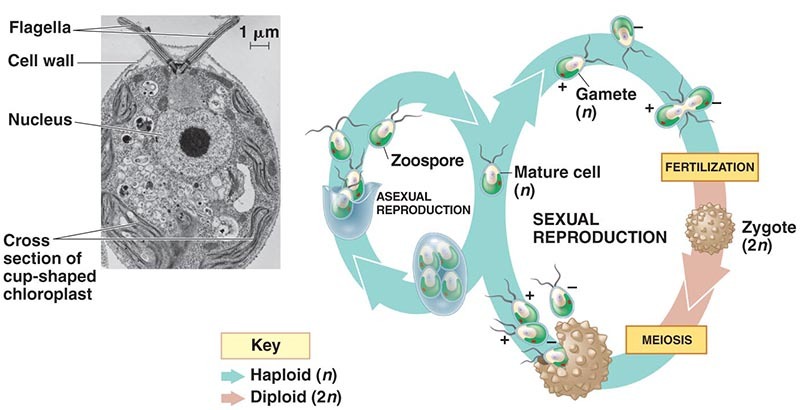 Sexual reproduction in Chlamydomonas varies through a wide range. It ranges from isogamy to anisogamy and even primitive type of oogamy.

In isogamy, the fusion of gametes similar in size form and structure and thus are called the isogametes. The sexual fusion takes place between biflagellate gametes coming from the same parent cell. The fusion gametes are motile, naked and smaller in size. At the time of gamete formation, the cell withdraws its flagella and comes to rest. The protoplast of cell then divided to form 16, 32, or 64 daughter protoplast It is pear shape in form and has no cell wall. The gametes release in water and swim for a while Finally they come near each other and fuse in pairs either end to end or side by side. The cytoplasm and nucleus fuses with each other. They come to rest, retracts its flagella, rounds up and secretes a thick wall around it to become a zygospore. It tides over unfavorable conditions.

When the conditions become suitable it become germinate. The diploid nucleus undergoes meiosis to form four haploid nuclei. The haploid nuclei are eventually incorporated into meiospore which are motile. At this stage, the zygospore wall crakes liberating the spores having two flagella. The meiospore then grow to an adult Chlamydomonas cell.