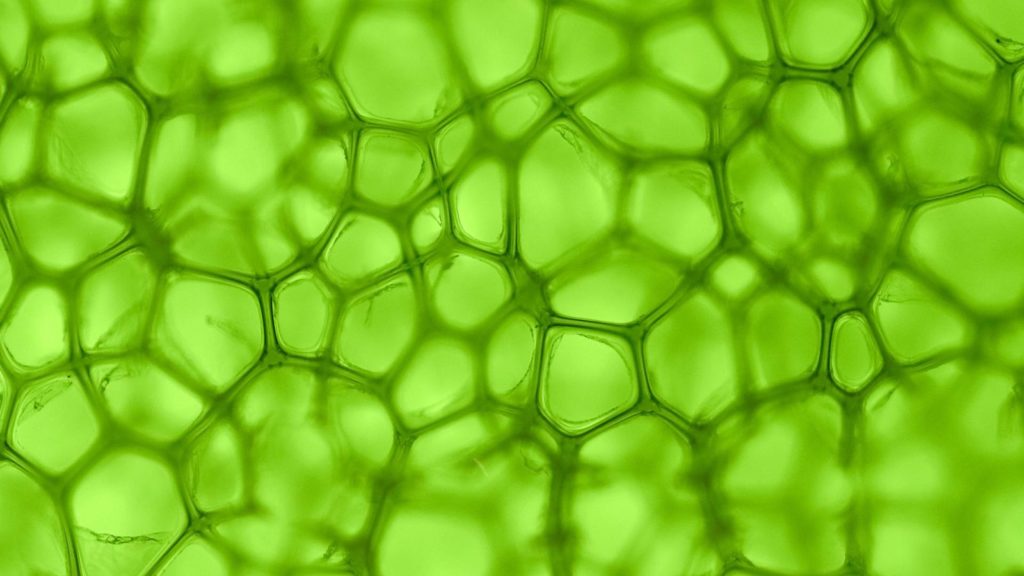 The chlorophyll molecule has a porphyrin-ring like structures (head) with a magnesium atom in the center and a long hydrophobic hydrocarbon tail that anchors it in photosynthetic membrane. The porphyrin ring (head) is a flat, square structure containing four smaller rings (I-IV), each possessing a nitrogen atom which can bond with magnesium atom.

Head: The head is hydrophilic and generally lies parallel to the membrane surface next to the aqueous solution of stroma for maximum absorption of light energy by the head causes changes in the energy levels of electrons within the head.

Tail: The tail is hydrophobic, lipid soluble phytol chain and is anchored to the thylakoid membrane.

The long phytol chain is joined to the head by an ester linkage formed between an alcohol group (-OH) at the end of phytol and a carboxyl group (-COOH) on the head. Different chlorophylls have different side chains that determine their absorption spectra.

A fundamental principal of light absorption, often called Stark Einstein Law, is that any molecule can absorb only one photon at a time and this photon causes the excitation of only one electron. When a molecule absorbs a photon, the electrons in stable ground state are excited. The photosynthetic pigment molecules remain in an excited state only for short periods, usually a billionth of a second or even much less. The excitation energy is used in photosynthesis.

It has been observed that chlorophyll molecule absorbs light in the red and blue parts of the visible spectrum which results in excitation of chlorophyll molecule. This excitation leads to an energy level called first excitation singlet. From here, the energy can be lost as heat loss or fluorescence (light production accompanying rapid loss of excited electrons), or can be transferred to adjacent pigment by inductive resonance. Each time a pigment transfers its excitation energy to adjacent pigments, the excited electron in the first pigment returns to the ground state. Finally, the energy in excited electrons of various pigments can be transferred to an energy-controlling pigment, a reaction center (trapping center which promotes the release of an electron) in the thylakoids. 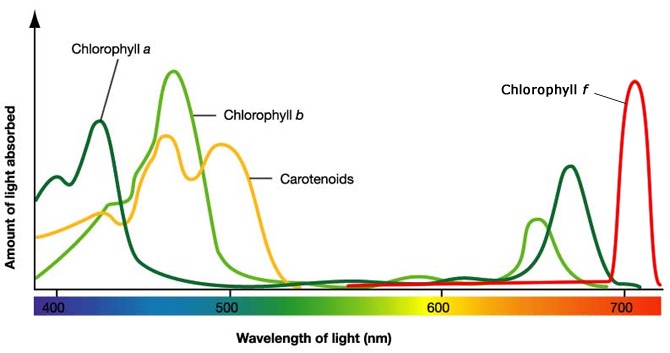 The graph which tells that which pigment absorbs which color of light in how much quantity. Both chlorophyll a and b show maximum absorption in the blue-indigo and orange-red region of visible spectrum. A very little of the yellow and green light between 500 and 600 nm is absorbed. The absorption spectra of chlorophylls provide an indirect evidence of the wavelengths of light effective in photosynthesis. The blue and red light are used by the green plants as energy source for photosynthesis. Chlorophyll a shows two minor peaks at about 680 and 700 nm, which results from special chlorophyll a molecule acting as reaction center pigments. These pigments are abbreviated P680 and P700. Carotenoids absorb radiant energy in between 449 and 490 nm. Carotenes show absorption peaks at 449 and 478 nm whereas xanthophylls at 440 and 490 nm.

The graph which shows relative effectiveness of different wavelengths or colors of light in photosynthesis is called action spectra.

By late 1950s, several experiments were puzzling the scientists who studied photosynthesis. In one such experiment Emerson measured the quantum yield (the number of oxygen molecules released per light quanta absorbed) of photosynthesis over the visible spectrum and found that quantum yield decrease at wavelength greater than 680 nm (far-red region), an area of spectrum occupied by the red absorption band of chlorophyll a. this decrease in quantum yield was referred to as red drop.