Ans: Any numerical or structural change in the usual chromosome complement of a cell or organism is called chromosome aberration. There are two types of chromosomal aberrations Changes in the number of chromosomes: Aneuploidy and euploidy Changes in structure of chromosome: deficiency (deletion), duplication, inversion and translocation. 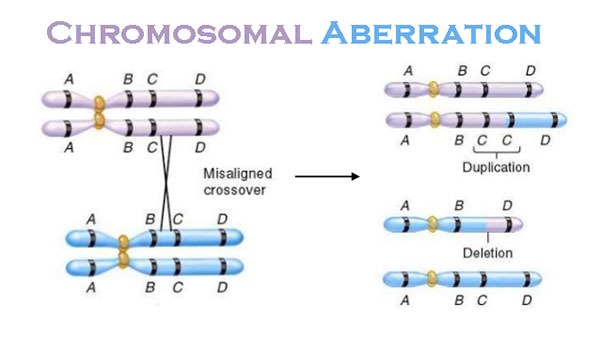 Ans: The random abnormal number of chromosomes in the animals is called as aneuploidy. Aneuploidy is mostly caused by nondisjunction.

Ans: If a chromosome is missing the aneuploidy is called monosomic. Therefore, the cell has 2n – 1 chromosomes.

Ans: In this case, an extra chromosomal material exists in some of the organism’s cells. The most common types of trisomy that survive without spontaneous abortion in humans are: Trisomy 21 (Down syndrome).

Ans: If the chromosome is present in tetrad form in the fertilized egg the aneuploid cell is called tetrasomics for that chromosome. The cell has a total of 2n + 2 chromosomes.

Ans: Effects of Aneuploidy: Aneuploidy is produced in sperm or egg, Later, it is transmitted to the zygote. Mitosis transmits the aneuploidy to all embryonic cells. Such organism may not survive. If the organism survives, it becomes abnormal. Nondisjunction can also occur during mitosis. The early aneuploid condition is passed to a large number of cells by mitosis. It has greater effect on the organism.

Ans: A condition in which the organisms have more than two complete sets of chromosomes is called polyploidy.

Ans: Autopolyploids are polyploids in with chromosomes derived from a single species.

Allopolyploids are polyploids with chromosomes derived from different species.

Ans: Triticale is an example of an allopolyploid. It has six chromosome sets. Four are taken from wheat (Triticum turgidum) and two are taken from rye (Secale cereale).

Ans: A deletion of part of the short arm of chromosome 5 results in Cri du chat. It is also known as “cry of the cat” syndrome. It is found in 1 in 50,000 live births. The surviving infants have a distinctive cry, severe mental retardation, and shortened life span.

Ans: Heterozygous deletion may cause pseudo-dominance. In this case, dominant allele is missing. Therefore, recessive allele expresses itself.

Ans: In this case, the fragment joins to the homologous chromosome with a duplication of genes. It adds one or more gene in the chromosome. Therefore, the organism carries same gene repeated in its haploid chromosome.

Ans: In this case, the duplication is adjacent to the normal chromosome. It has same order as the original order. It is believed that the homologous chromosomes overlap each other. Therefore, the segments break simultaneously at different points.

Ans: It is caused due to an exchange of material between non-homologous chromosomes. Reciprocal translocations are found in about 1 in 600 newborns.

Robertsonian translocations of rearrangement involves two acrocentric chromosomes. These chromosomes fuse near the centromere region with loss of the short arms.