The Chromosome Deletion or Deficiencies Phase In Chromosomal Aberration

The chromosome deletion is also termed as (gene deletion, Deletion mutation, Deficiency or deletions) is a chromosomal aberration in which a portion of a chromosome or a part of genetic material (DNA) is lost during the process of replication, that missing piece is referred as Chromosome Deletion or Deficiency. 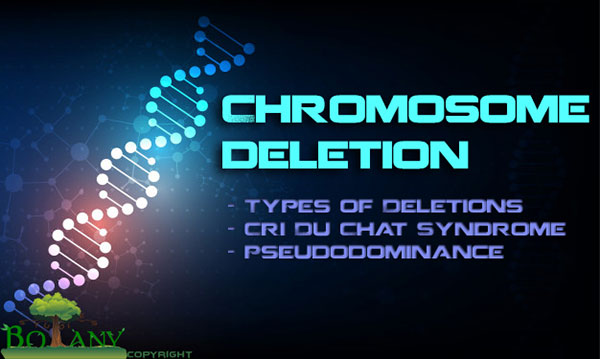 Such a configuration is called a Deficiency Loop or Compensation Loop. Loops can be observed in salivary glands chromosomes of Drosophilla.

If too much genetic information is lost as a result of deletion, the aberration may be lethal, as in Cri Du Chat Syndrome in human beings, where only part of the short arm of chromosome 5 is lost. 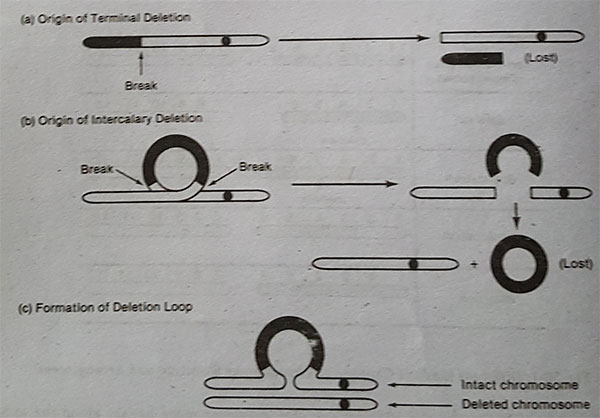 Origin of Terminal and Intercalary Deletions and Formation of Deficiency Loop

A final consequence of deletion may be noted in organisms heterozygous for a deficiency. Deletions or deficiencies have an effect on inheritance also. In presence of a deficiency, a recessive allele will behave like a dominant allele (Pseudodominance —— phenotypic expression of recessive genes in association with a deletion).

The principle of pseudodominance exhibited by deficiency heterozygotes has been utilized for location of genes of specific chromosome in Drosophilla, Maize and other organisms. L. J. Stadler pollinated a homozygous recessive stock Maize with irradiated pollens from dominant stock, so that if irradiations induce a deficiency, recessive allele will express itself due to pseudodominance.

If homozygote abc is pollinated by ABC, heterozygous F1 individuals (ABC / abc) will be produced expressing dominant characters. If pollen with dominant allele ABC is irradiated, a deletion may be induced leading to expression of pseudodominance by one or more recessive alleles.

If meiosis at pachytene is examined in such a deficiency heterozygote, presence of loop will indicate location of gene. Several genes were located on different chromosomes of Maize, using this method.