Many species living in arid climates have thick leaves and relatively low surface-to-volume ratio and have low transpiration rates. Their cells have large central vacuoles with a thin layer of cytoplasm around them. These plants are called succulents. Another characteristic feature of these plants is that their stomata opens at night and fix CO2 into organic acids. This help them minimize water loss due to transpiration, the succulents are classified into 20 families including Cactaceae, Orchidaceae, Bromeliaceae, Liliaceae and Euphorbiaceae. 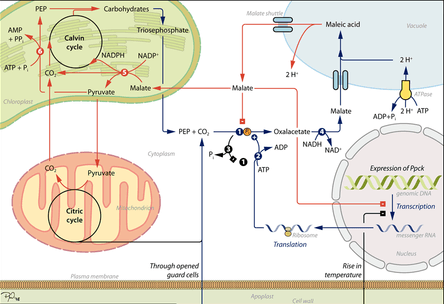 The CO2 metabolism is succulents is unusual. It was first investigated in members of Crassulaceae, therefore, called crassulacean acid metabolism (CAM) and the plants exhibiting this metabolism are known as CAM plants. The CAM plants are usually without a well-developed palisade layer of cells, and most of the leaf or stem cells are spongy mesophyll. Bundle sheath cells are present but are quite similar to the mesophyll cells.

The following steps are involved in Crassulacean Acid Metabolism: