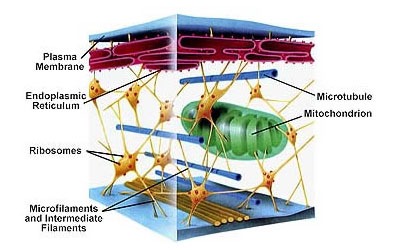 Sol: Non-viscous colloidal solution is called sol. It is present in liquid form.

Gel: The viscous colloidal solution is called gel. It is present in the form of semi-solid. The peripheral part of cell is often like a gel.

Cytoplasm has unique physical properties. Cytoplasm is mixture of sol and gel component. It can flow like a sol. But gel offers resistance in its flow. The cytosol is gel like near outer membrane. But it is non-viscous or sol like in the interior end. Cytoplasm shows streaming and cyclic movements due to this property. Cytoplasm has almost neutral PH. Most of the salts are present in ionic form in cytoplasm.