Detailed Study of Euploidy In Genetics And Differentiate Haploid and Monoploid

Euploidy In Genetics – Differentiate Haploid and Monoploid, Give Methods For Production of Haploids

Euploidy is a condition where one or more full sets of chromosomes are in an organism. The euploids may be Monoploids, Diploids (normal organisms) Polyploids. 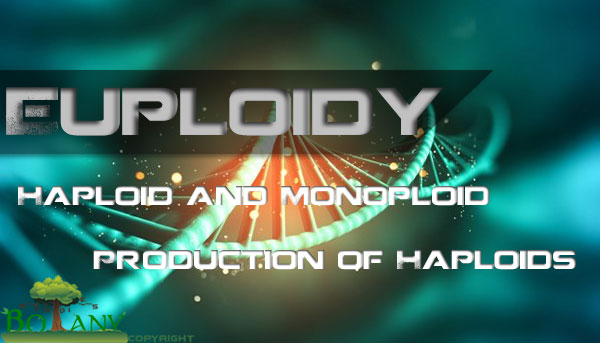 A distinction should be made between monoploidy and haploidy. Monoploids can be distinguished from haploids as they have a single basic set of chromosomes, e.g., in Barley (Avena sativa) 2n = x = 7 or in Corn 2n = x = 10 where x = basic number, while the Haploids have half the somatic number of chromosomes found in normal individual. i.e., each chromosome is represented once. Therefore, individuals having 2n = 3x = 21 in Wheat would also be haploids because these haploids are obtained from polyploids, therefore, these are often called Polyhaploids.

Artificial Methods For Production of Haploids

The haploids can be artificially produced by any one of the following methods:

Most important of these are distant hybridization and Anther culture.

Since in a haploid set, the chromosomes are non-homologous and have no homologues to pair with, they are found as univalent at metaphase I of meiosis. Consequently, these univalent distribute at random during anaphase I. For example, a haploid in Maize (2n = 20) will have 10 chromosomes and the number of chromosomes in a gamete of a haploid plant can range from 0-10, resulting in sterility.

Artificial methods for production of haploids euploidy Euploidy definition Euploidy in genetics Haploid and monoploid monoploid 2018-07-26
admin
Previous: Aneuploidy, What Causes Aneuploidy and Types of Aneuploidy
Next: Give Variation in Chromosome Number Significance And Describe Endopolyploidy