Different Types of Hybridization in Genetics

Hybrid organism is produced by interbreeding between two animals or plants of same or different taxa. This process of hybrid formation is hybridization. There are three types of hybridizations: 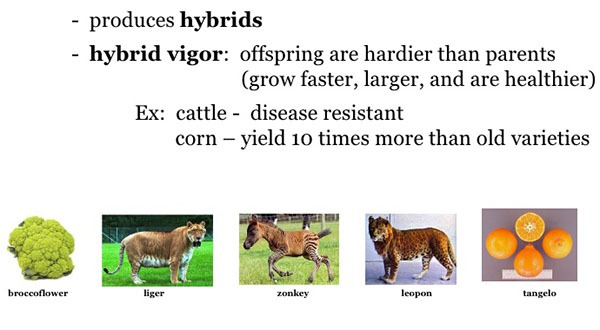 Hybridization And Types of Hybrids

(b) Intraspecific Hybridization/Hybrids: Hybrids or hybridization between different sub-species within a species are called intra-specific hybrids.

Plant hybrids are often stronger than either parent variety. This phenomenon is known as hybrid vigour (heterosis) or heterozygote advantage. Plant breeders make use of a number of techniques to produce hybrids.

Interspecific hybrids are bred by mating two species, normally from within the same genus. The offspring display traits and characteristics of both parents. The offspring of an interspecific cross may be sterile. Sterility is caused is some species due to different number of chromosomes the two species have. Plant species hybridize a lot more readily than animal species and they are generally fertile. Plant hybrids are often created to get different characteristics from both parents. It improves production of seeds or fruit. Hybrid plants are plants that are created manually, so they can useful characteristics. Some plant hybrids are:

(a) Leyland Cypress, a hybrid between Monterey Cypress ‘E and Nootka Cypress.

(b) Limequat. lime and kumquat hybrid.

(c) Loganberry, a hybrid between raspberry and blackberry.

(e) Peppermint, a hybrid between spearmint and water mint.

(f) Tangelo, a hybrid of a Mandarin orange and a pomelo or a grapefruit which may have been developed in Asia about 3,500 years ago.

(h) Wheat; most modern and ancient wheat breeds are themselves hybrids.

Hybridization creates multiple variations across genes or gene combinations. Successful hybrids could evolve into new species within 50-60 generations. This leads some scientists to speculate that life is a genetic continuum rather than a series of self-contained species.

In botanical nomenclature, a hybrid may be given a hybrid name. it is a special kind of botanical name. The ICBN provides the following options in dealing with a hybrid:

A hybrid name is a botanical name, and is treated like other botanical names. The multiplication sign is not part of the actual name. This means that, say, Drosera x anglica for nomenclatural purposes is to be treated as Drosera anglica.