Discovery of Photoperiodism in Plants

Photoperiodism is the response of a plant to the relative length of light and dark periods to produce flower. The relative length of day and night to which a plant is exposed is called the photoeriod. Photoperiodism is a photobiological process – a process that involves absorption of light by a receptor (usually a pigment) that results in activation of that receptor which results in initiation of a chemical sequence of chemical reactions that leads to a general plant response. 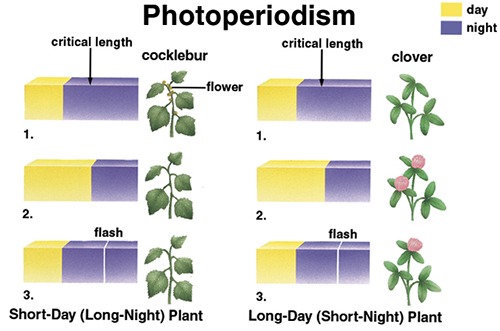 The responses to photoperiod include seed germination, stem elongation, promotion of rooting in cuttings, formation of storage organs such as potato tubers and onset of dormancy. But most important photoperiodic response is perhaps initiation and further development of flowers.

Julien Tournois (1910) provided first practical evidence regarding the effects of the day length (photoperiod) on flowering. He found that hemp (Cannabis sativus) flower vigorously if planted early in the spring but remains in a vegetative state if planted in later spring or summer. George Kaleb (1918) working with house leek plants (Seinpervivuni fnnkii – a long day plant), found that flowering can be induced by artificial illumination in midwinter in a green house, although the normal time of flowering for this plant is June. Most physiologists of Kaleb’s days believed that role of light in the life of plants in nutritional. When the plants are exposed to continuous light, they produce more photosynthate which causes flowering. But, when hop (Houbin japonais) and hemp (Cannabis sativus) were exposed to low light intensities of light for longer periods, the plants did not flower. This observation confirmed that photoperiod (day length) is more important than intensity of light.

The first clearly hypothesis on photoperiodism was given by Garner and Allard. They observed that Biloxi soya-bean (Glycine max) plants flowered in September and October even if they were germinated over a 3-month span in May, June or August. They observed that a variation of 59 days in germination date during May and June caused a difference of only 11 days to the first open flowers. The number of days from germination to blossoming and the final height of plants decreased as the season continued. This suggest that in soya-bean plants there is a seasonal timing mechanism.

Later they studied the flowering pattern of tobacco plants growing in Maryland state of U.S.A. The seeds of commercial strain of tobacco plant (Marry-land narrow leaf) are germinated in beds during Feb-March and transplanted in fields during April-May when the day length is about 14 hours. The plants flower during late summer when day length is about 12 hours. Garner & Allard observed a mutant in the fields that was taller, have much larger leaves and did not flower throughout the season. They named it as Maryland mammoth and transferred it to green-house at the end of the season. The plant flowered in winter and produced seeds hen the days are shorter relatively. They also found that if the seeds are germinated in the winter in green-house and the seedlings are transferred to the fields during spring, small plants develop, flower and produce seeds. However, when the seeds are germinated in spring and transplanted to fields, the plants grew vegetatively.

Next Garner and Allard constructed dark chambers to cover plants grown in field during summer. They covered the plants after exposing them to day length equivalent to winter day (shorter duration of light) and found that the plants flowered in summer. They also built growth chambers in the green-house where the length of light period could be varied during winter with artificial light. They found that plants remain vegetative when the light period was increased during winter. After ruling out other factors, such as temperature, nutrition and light intensity, Garner & Allard concluded that the length of light and dark periods within a 24-hours cycle is a significant factor in promoting flowering. Garner and Allard called Maryland mammoth a short-day plant (SDP) as the short photoperiods promoted flowering. Later, Garner & Allard found a number of other plants in which flowering is promoted by short durations of light period.