Drought can be defined as an extreme fluctuation from the rainfall (usually than 75% of the normal) at a certain place in a particular area. In water stress areas the plants (xerophytes and succulents) are adapted to shortage of water and dry season normally does not affect their growth. However, if the rainfall drops far enough below the normal amount the plants are affected badly. This is referred to as drought. The drought leads to reductions in size, vigour and yield of plants and in some cases, may lead to death. Drought is common in all climates. but in moist climates a relatively short rainless period or a longer rainless pond in semi-arid regions brings a pronounced effect. Dry season is accompanied with higher temperatures that cause plants to use up soil moisture more rapidly, thus promoting the effect of drought. 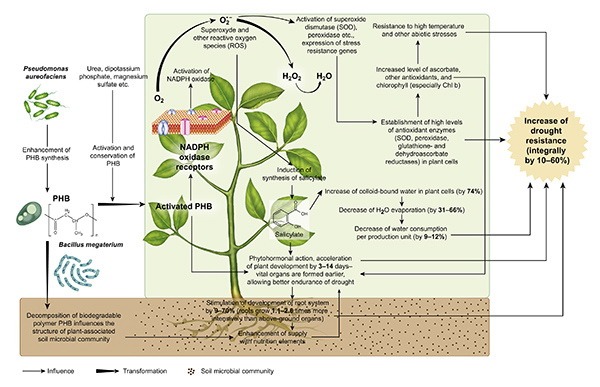 Plants exhibit response to drought variously, such as:

Plants in arid and semiarid regions have evolved adaptive mechanisms to survive and reproduce in a dry environment. These include:

Reduction of Leaf Area of Canopy

The plants drop their leaves during periods of extreme drought to reduce leaf area of canopy. They develop new leaves at the onset of rainy season. Although this adaptation affects photosynthesis but the plants compensate it by increasing photosynthetic activity in green stems.

Change of Angle of Leaves

When water is limiting. many plant species reorient their leaves so their surfaces are parallel to the sun’s rays. This adaptation helps reducing transpiration and conservation of water

Succulence is development of fleshy tissue for storage and retention of water in roots, stems or/and leaves. Such plants ace called succulents, for example cacti. The cacti possess shallow roots system, therefore are able to absorb sufficient moisture during short rainy season. Their cells possess large vacuole which can store water. This stored water is used by the plant during periods of drought. They close their stomata during the day and open them at night and take in a fix carbon dioxide for use during the day (CAM plants). In this way the transpiration is minimized.

Plants respond to drought by various leaf adaptations. In some plants the Leaves are small, the cell walls thickened, the stomata -smaller but more in number per unit of surface area, the vascular system denser, and the palisade tissue is more highly developed. These modifications help increase the ratio of internal exposed cellular surface of the leaf to the external surface. Others have leaves coated with waxes and resins that reflect tight and reduce heating of leave and transpiration, therefore.

Some woody plants have deep roots that can reach an underground water supply. Other, plants have spreading shallow root system that covers a large area. Such root systems enable the plants the get Maximum water.

Some plants adopt an ephemeral life cycle in which the seeds germinate quickly during rainy season, bloom and produce seeds before the moisture is exhausted. They survive dry periods as dormant seeds.

Water supply to halophytes (plants growing in saline waters, salt marsh for example) is limited. These plants dilute their internal solutions with water stored in the tissue. These plants possess salt-secreting glands and their leaves are coated with heavy cutin.

Ecological Classes of Plants Based on Water Relations

Plants can be classified according to their water ‘relationships. In 1895 E. Warming proposed three classes: hydrophytes, xerophytes and mesophytes.

Hydrophytes include aquatics which normally grow in water, and swamp, marsh and bog plants. Hydrophytes are characterized by presence of spongy tissue with intercellular spaces and air spaces. This tissue provides buoyancy and aid in dissemination. The hydrophytes may be phytoplanktons, floating (Eichhornia, Wolffia), submerged (Elodea, Vallisneria, Clara, Potamogeton), floating-leaved (Nymphaea), and emergents (Typha, Carex).

Xerophytes are plants of relatively dry habitats. Xerophytes may be ephemeral annuals that complete their life cycles in very short time; succulents that contain cells with large vacuoles for storage of water, for example cacti, euphorbia; and non-succulent perennials that can endure period of permanent wilting.

These are plants that cannot inhabit water or wet soil and soils where growth water is significantly depleted.

2017-12-08
admin
Previous: Precipitation And Its Types
Next: Adaptation of Plants to Temperature