The word endoplasmic means “within” the cytoplasm. The word “reticulum” means the “network”. The Endoplasmic reticulum consists of a network of membranous tubules and sacs called cisternae. The ER are extensive in the cell. They are composed of more than half of the total membrane in many eukaryotic cells. The ER membrane separates the cisternal space from the cytosol. The ER membrane is continuous with the nuclear envelop at one end. The space between the two membranes of the nuclear envelope is continuous with the cisternal sace of the ER. There are two distinct regions of ER. These regions differ in structure and function. 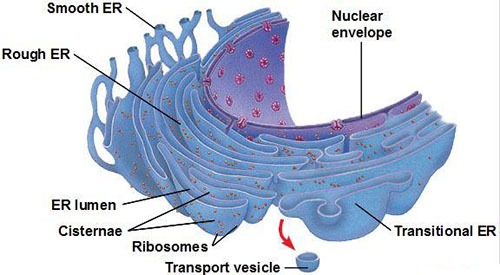 The cytoplasmic space of SER lacks ribosomes. So, they are known as SER. SER of various cell types functions in diverse metabolic processes like synthesis of lipids, carbohydrate metabolism, the detoxification of drug and other poisons. These functions are as follow:

Synthesis of Lipids: Enzymes of the smooth ER are important for the synthesis of fats, phospholipids, steroids and other lipids, they produce steroids. The steroids are the sex hormones. The cells of the testes and ovaries are rich in smooth ER. These cells synthesis and secrete steroid hormones.

Detoxification of Drugs: The enzymes of the smooth ER detoxify the drugs and other poisons in liver cells. Hydroxyl group is added during detoxification. It increases their solubility.

Protein Synthesis: Many types of specialized cells secrete proteins produced by the rough ER. For example, white blood cells in humans and other vertebrates secrete antibodies. Proteins for secretion are synthesized by ribosomes attached to the rough ER. The polypeptide chain grows and enters through the ER membrane into the cisternal space. The protein enters the cisternal space and it is folded. Most secretory proteins are glycoproteins. In this case proteins are covalently bonded to carbohydrates in SER. The secretory proteins are wrapped in the membranes of vesicles. They are budded from a specialized region called transitional ER. Such vesicles are called transport vesicles. 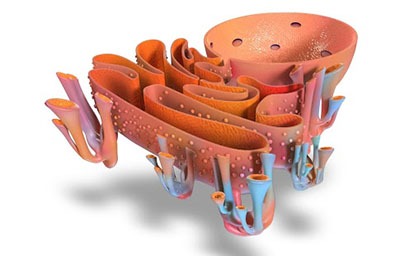 The word endoplasmic means “within– the cytoplasm. The word reticultun in ans “network.– The. ER comprises of a network of membranous ubules and sacs called cisternae. The ER are broad in the cell. 1k are made out of the greater part of the aggregate membrane in mt-–lkaryotic cells. The ER membrane isolates the cisternal space from, cytosol. ‘ate ER Membrane is nonstop with the atomic envlope toward one side. The space between the two membranes of the n. :dear en’s abscond is nonstop with the cisternal space of the ER. ‘lime are two unmistakable locales of ER. These districts jitter in structure and capacity:

The cytoplasmic surface of the SER needs ribosomes. So they are known as SER. SER of different cell sorts capacities, in assorted metabolic procedures like synthesis of lipids, starch digestion, the detoxification of medication and different toxic substances. These capacities are:

I. Synthesis of lipids: Enzymes of the smooth ER are critical

for the synthesis of fats, phospholipids, steroids, and different lipids. They create steroids. The steroids are the sex hormones. The cells of the testicles and ovaries are rich in smooth ER. These cells incorporate and discharge steroid hormones.

Starch digestion: Liver stores sugar as glycogen. The hydrolysis of glycogen discharges glucose from the liver. This hydrolysis is critical in the direction of sugar fixation in the blood. Every one of these responses happen in SFR.

Detoxification of medications: The enzymes of the smooth ER detoxify the medications and different toxic substances in liver cells. Hydroxyl aggregate is included amid detoxification. It expands their dissolvability.

I. Protein Synthesis: Many sorts of particular cells emit proteins delivered by the unpleasant ER. For instance. white platelets in people and different vertebrates discharge antibodies. Proteins for emission are combined by ribosomes appended to the unpleasant ER. The polypeptide chain develops and enters through the ER membrane into the cistemal space. The protein enters the cistemal space and it is. collapsed. Most secretary proteins are glycoproteins. For this situation proteins are covalently attached to

sugars in SER. The secretary proteins are wrapped in the membranes of vesicles. They are grown from a particular area called transitional ER. Such vesicles are called transport vesicles.

2. Membrane generation: Rough ER is a membrane production line. It develops by including proteins and phospholipids. They are embedded into the ER membrane itself The enzymes show in the RER integrate their membranes from these phospholipids and proteins. The ER membrane can be moved into the cell membrane as vesicles.