Ephedra is an arid plant. It is found in Europe, Western and Central Asia and Central and South America. It is also found in arid areas of Pakistan. Ephedra is source of drug Ephedrine. It is used for the treatment of asthma, cough and hay-fever. 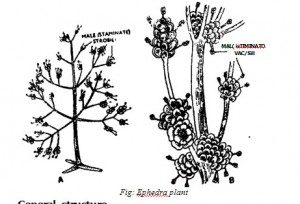 The plant body of Ephedra is sporophyte. It is a bushy plant. Sometimes, it becomes a climber. It height is ranging from I to 25 feet. The body is divided into root stems and leaves.

1. Stem: Stem and branches are slender and green in colour. It has longitudinal ridges and furrows. Stem becomes woody due to the limited secondary growth. In some cases, underground rhizomes are also produced. The branches arise from azillary buds. Their arrangement gives the plants characteristic bushy and broom-like appearance. Apical meristem produces nodes and internodes. Meristematic tissues are also present at the base of each internode. Their activity further increases the length of stem. Sometimes, meristematic tissue becomes hard at the end of the growing season. Thus many braches fall. These branches are replaced by axillary shoot. It gives bushy appearance to the plants. The ridges and furrows of the successive internodes alternate with each other.