Light is an important factor as photosynthesis does not take place in dark. When considering effect of light on photosynthesis it is important to distinguish between the effects of light intensity and light quality. 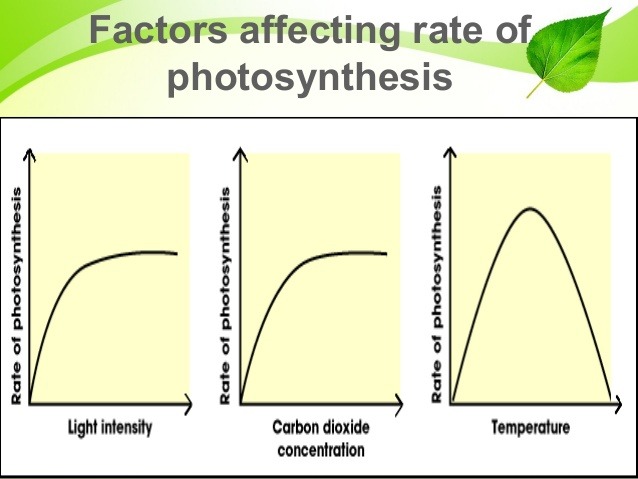 Photosynthesis begins at illuminations of very low intensity, reaches at maximum bright diffuse daylight and decreases in strong light. However, plants differ in their need for intensity of light., ferns or shade plants require less intensity of light as compared to trees.

Other factors also limit the release of carbon dioxide into plants. These include the boundary layer surrounding the leaf, Stomata resistance and resistance offered by mesophyll cells to diffuse of liquid carbon dioxide. Similarly, shortage of water result in closure of stomata and intercellular carbon dioxide concentration decreases.

The dark reactions and to a certain extend to light reactions, are enzyme-controlled and affected by temperature. The temperature at which photosynthesis starts (minimum temperature) differ from species to species, for example plants growing in cold and temperate regions it may be -20°C (lichens) or 35°C (conifers) and those growing in tropical regions it is 5°C. the optimum temperature for tropical plants is usually about 25°C. the rate doubles for every 10°C rise up to 35°C. higher temperature denatures the enzymes or destroy the photosynthesis. In C-3 plants increase in temperature results in increase in rate of respiration that favors photo-respiration.

Water is reactant (raw material) in photosynthesis but it affects so many other cell processes as well, therefore, it is impossible to measure the direct effect of the water on photosynthesis. However, by studying the yields of water-deficient plants, it can be shown that periods of temporary wilting can lead to severe yield losses. Even slight water deficiency might significantly reduce crop yields. The may be because plants usually close their stomata in response to wilting and entry of CO2 necessary for photosynthesis is stopped. Also, it has been shown that abscisic acid (ABA) develop in response to water shortage that closes the stomata. Water deficiency, i.e., when water becomes limiting, causes retardation of leaf expansion, therefore, reduction in growth.

Mineral nutrients are the limiting factors. Many organisms settle to the bottom when they die, taking their mineral with them. Thus, the surface waters where light and CO2 are most abundant become short of phosphates, nitrates and other essential nutrients affecting and decreasing the rate of photosynthesis. When special conditions bring the nutrients to the surfaces, increase in the rate of photosynthesis can be noticed in the form of profuse bloom of phytoplankton.