The fossil record shows that there are four major periods of plant evolution, which took place the history of evolution of earth. Since the first organism formed on earth. But before discussing the periods of evolution let’s discuss the basic concepts of evolution in plants diversity. 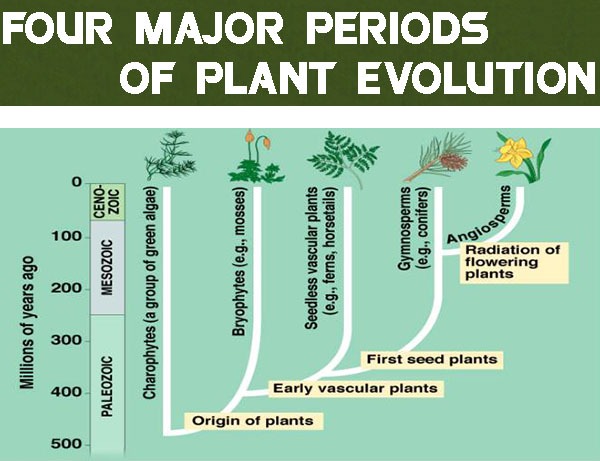 Nearly all plants reproduce sexually. Most plants are also capable of asexual propagation. Plants produce their gametes within gametangia. Gametangia has protective jackets of Sterile (non- reproductive) cells. It prevents the delicate gametes from drying during their development. The egg is fertilized within the female organ. The zygote develops into an embryo. Embryo is retained for some time within the jacket of protective cells.

Four major periods of plant evolution are as follow:

Origin of Plant from Aquatic Ancestors: The first period of evolution was associated with the origin of plants from aquatic ancestors. Plants evolve from algae during the Silurian period about 425 million years ago. The first terrestrial adaptation was formation of cuticle and jacketed gametangia. It protects gametes and embryos. Then evolution of vascular tissue takes place. Vascular tissues consist of cells joined into tubes.

Vascular tissue transport nutrients throughout the plant. Vascular tissue evolved relatively early in plant history. Most mosses lack vascular tissue. Therefore, they are called non-vascular plants. However, water conducting tubes are present in some mosses. But it is not clear whether tubes of mosses are analogous or homologous to the water-conducting tissue of other plants.

Evolution of Seed: The third major period of plant evolution begun with the origin of the seed. Some Seed protects embryo from desiccation and other hazards. A seed consists of an embryo packed ovule along with store of food within a protective covering. The first seed producing vascular plants arose about 360 million years ago, near end of Devonian period. These plants have naked seeds. They are not protected by covering. These plants are gymnosperm (conifers). They include pines and other cones. Gymnosperms coexisted with ferns and seedless plants for more than 200 million years.

Evolution of Flowering Plants: Flowering plant evolved about 130 million years age during early Cretaceous period. The flower is a complex reproductive structure. Their seeds are protected within fruit. The flowering plants are called angiosperms.

2017-11-02
admin
Previous: Characteristics of the 5 Kingdoms
Next: Classification of Viruses