Following are the important genetics test questions and answers for exams and papers. Students can prepare their quiz, monthly tests, final exams right here at botanystudies.com. 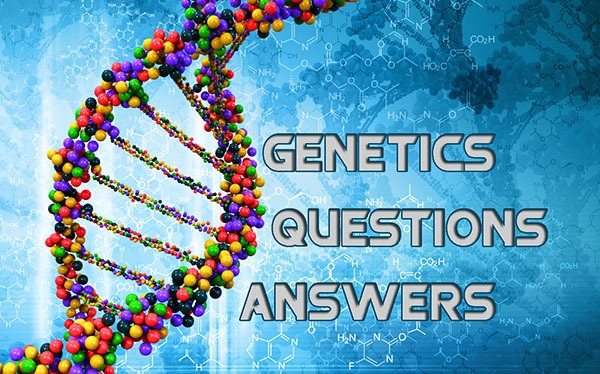 Ans: It is a traditional technique. The crossing of different varieties of plants species is called hybridization. Hybridization is used to produce plants with desirable traits. Vegetative propagation is performed on hybrid plants. It produces large number of identical plants with these traits. genetics test questions and answers

Ans: The amount by which individuals in a population differ from one another due to their genes, rather than their environment is called genetic variability.

Ans: Neutral Mutations: Neutral mutations are defined as mutations whose effects do not influence the fitness of either the species or the individuals of the species. These can accumulate over time due to genetic drift. DNA repair is able to revert most changes before they become permanent mutations. Therefore, majority of mutations have no significant effect. Many organisms have eliminating permanently mutated somatic cells. genetics test questions and answers

Ans: In case of Splice site mutation, the coding region of a gene may alter splicing of the mRNA (splice site Frame-shift mutations cause a shift in the reading frame.

Ans: Amplifications (or gene duplications) leading to multiple copies of chromosomal regions. It increases the dosage of the genes located within them.

Ans: These are the result of gene product having less or no function. When the allele has a complete loss of function (null allele) it is often called an amorphic mutation. Phenotypes associated with such mutations are most often recessive.

Ans: These change the gene product such that it gains a new and abnormal function. These mutations usually have dominant phenotypes. These are also called a neomorphic mutation.

Ans: Genetic recombination is the transmission-genetic process by which the combinations of alleles observed at different loci in two parental individuals become shuffled in offspring.

Ans: The process by which certain traits or gene are selected due to some environmental advantage is called selection. Selection is classified into natural and artificial selection.

Ans: In the context of evolution, certain traits or alleles of a species may be subject to selection. Under selection, individuals with advantageous or “adaptive” traits tend to be more successful. They contribute more offspring to the succeeding generation than others do. The offspring will inherit those traits from their parents. Therefore, selection can increase the prevalence of certain traits.

Ans: Selection occurs only when the individuals of a population arc diverse in their characteristics. In the absence of individual variation, or when variations are selectively neutral, selection does not occur.

Ans: Distinct from patterns of selection are mechanisms of selection; for example, disruptive selection often is the result of disassortative sexual selection. Similarly, balancing selection may result from frequency-dependent selection and overdominance.

Ans: Plant breeding is the purposeful manipulation of plant species in order to create desired genotypes and phenotypes for specific.

Ans: In 1908, George Harrison Shull described Heterosis hybrid vigor. Heterosis describes the tendency of the progeny of a specific cross to outperform both parents. The detection of the usefulness of heterosis for plant breeding has led to the development of inbred lines. Maize was the species in which heterosis was used to produce hybrids.

Ans: Hybrids may also be produced by a technique called protoplast fusion. In this case, protoplasts are fused, usually in an electric field. Cell fusion may lead to nuclear fusion. It produces an amphi-diploid somatic hybrid cells. Fusion products of closely related but sexually incompatible plants have been grown to flowering plants. genetics test questions and answers

Ans: A population of plants that differ consistently from the typical form of the species, occurring naturally in a geographical area is called plant variety.