Gluconeogenesis is the process by which glucose is synthesized from noncarbohydrate precursors. The major noncarbohydrate precursors are pyruvate, lactate, glycerol , and glucogenic amono acids. Some body tisssues, such as brain, renal medulla, erythrocytes, lens and cornea of eye, exercising muscle, and testes, require a continuous supply of glucose as a metabolic fuel. Hepatic glycogen can meet these needs for only 10 – 18 hours in the absence of dietary carbohydrate. Liver glycogen stores are depleted during a prolonged fast and glucose is synthesized by the process of gluconeonenesis. Liver and kidney are the major organs where gluconeogenesis occurs. About 90% of gluconeonenesis occurs in the liver and 10% in the kidney during an overnight fasting. However, during prolonged fasting, about 40% of gluconeonenesis occurs in the kidney.

All the intermeditates of glycolysis and citric acid cycle are the substrates of gluconeonenesis. The most important gluconeonenesis substrates are glycerol, lactate, and α-ketoacids derived from the deamination of glucogenic amino acids.

2) Lactate is derived from anaerobic glycolysis in exercising skeletal muscle and in cells that lack mitochondria, and is delivered by the blood to the liver. Lactate is reconverted to pyruvate in the liver that form glucose via gluconeogenesis. 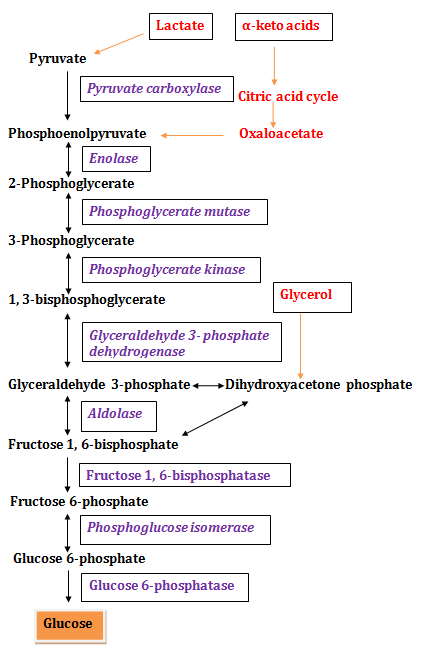 Reaction 1: Pyruvate is converted to phosphoenolpyruvate by the enzyme pyruvate carboxylase. Biotin and ATP are required as cofactors in this reaction.

Reaction 2-7: Conversion of phosphoenolpyruvate to fructose 1, 6-bisphosphate occurs by the sequential reactions, which are simply the reverse of those that occur in glycolysis pathway and same enzyme catalyze them.

1)  Glucagon – Glucagon is the principal hormone that stimulates gluconeogenesis.

3)  Allosteric activation by acetyl CoA – During fasting, the rate of formation of acetyl CoA by excessive lipolysis in adipose tissue exceeds the capacity of liver to oxidize it to carbon dioxide and water. As a result acetyl CoA accumulates, which leads to activation of hepatic pyruvate carboxylase.