Following are the gymnosperms questions for papers. Students can prepare these important quiz questions to prepare for the exams and tests. 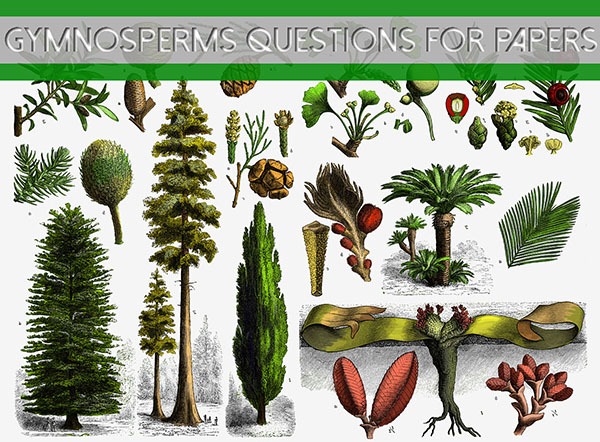 Ans: Gymnosperm are naked seeded plants. Gymnosperms are a group of ancient plants. They become dominant in the Jurassic period. Most of the gymnosperms are evergreen trees. Some shrubby plants are also found in this group. They have worldwide distribution. They are most abundant in the temperate region. The fossils of gymnosperms are found near coal and oil deposits.

Ans: Pollen tube carries male gametes to egg (oosphere). Fertilization occurs and diploid oospore is formed. Oospore is the beginning of gametophyte generation. The oospore give rise to the embryo. Prothalial tissues provide nourishment to developing embryo. Integument is transformed into the seed coat. The unutilized prothalial cell becomes endosperm.

Ans: Both have alternation sporophytic and the gametophytic generations. Their sporophyte is dominant and forms the main plant body. Gametophyte is reduced to prothallus. Both are heterosporous.

Ans: There is no seed formation in the pteriophytes. But present in gymnosperms. The male cells or sperms are carried by pollen-tube to the archegonia in the gymnosperms. But pollen tube is absent in Pteridophytes.

Ans: They are similar in their external morphology, i.e., the differentiation into root stem and leaves. Both have identical internal anatomy. Cambium is present in gymnosperm and dicot angiosperms.

Ans: The reproductive structures of angiosperms are flowers, those of gymnosperms are cones. In angiosperms, the seeds are enclosed by true carpels and at maturity, a carpel forms a fruit. It is absent in gymnosperms.

Ans: Cycas is called a living fossil. It has several characters common with the Pteridophytes.

Ans: Transfusion tissues are present around mid-ribs. They cause lateral conduction in the leaf.

Ans: The microspore cut off lateral prothalial cell towards one side of the spore. The larger cell then cuts off a small generative cell adjacent to the prothalial cell. It itself becomes tube cell. The microspore is liberated at this stage. Spores are dispersed by wind. gymnosperms questions for papers

Ans: The genus Pinus has about 90 species. It has world-wide in distribution. They are mostly present in the temperate regions. Four species of Pinus are found in Pakistan: Pinus wallichiana; Pinus halepensis; Pinus roxburghii; Pinus gerardiana.

Ans: The scales are of two types. Some are thin membranous and are directly attached to the central axis. They are called bract scales. Woody ovuliferous scales are present on the ventral surface of each bract scale. gymnosperms questions for papers

Ans: Each ovule secretes a mucilaginous drop at the micropylar end. A gap is produced between the ends of the ovuliferous scales. It forms a passage for the entry of pollen grains. Wind carried pollen grains. The mucilage drop entangles the pollen grain. Pollen grain is carried through the micropyle to the surface of the nucellus.

Ans: The radicle grows out. It splits the testa at the micropylar end. This radicle grows down into the soil and forms the primary root. The hypocotyl elongates to form a loop. Then it becomes straight. It carries with it the plumule and the cotyledons. The testa is also carried up with the cotyledons. The plumule forms the first main shoot: It develops foliage leaves spirally.

Ans: The leaves are scale like. They are opposite and arranged in pairs. The leaves of each pair are joined with each other at their bases. It forms a small sheath around the stem.

Ans: The pollen tube enters the archegonium. It releases two male gametes. One gamete unites with the oosphere and form oospore. The other gamete fuses with the ventral canal nucleus to forms a layer of true endosperm. It is an approach to the process of double fertilization like Angiosperms.