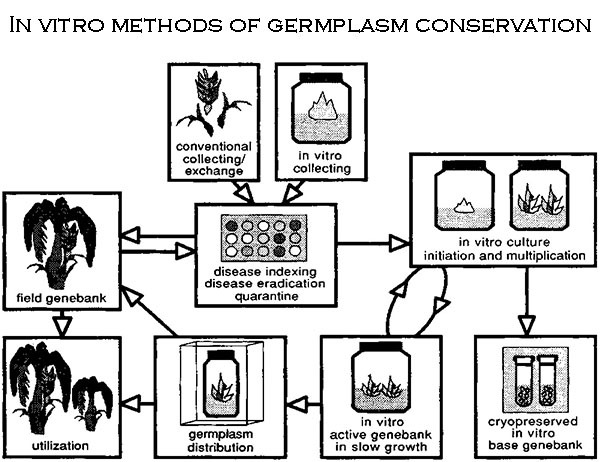 In this case the cells are preserved in the frozen state. The germplasm is stored at a very low temperature using

The cells stay in completely inactive state. Thus, they can be conserved for long periods. Any tissue from a plant can be used for cryopreservation e.g. meristems, embryos, endosperms, ovules, seeds, cultured plant cells, protoplasts, calluses. Certain compounds like- DMSO (dimethyl sulfoxide), glycerol, ethylene, propylene, sucrose, mannose, glucose, praline, acetamide etc. Are added during the cryopreservation. These are called cryoprotectants and prevent the damage caused to cells (by freezing or thawing) by reducing the freezing point and super cooling point of water. This is the first  in vitro method of germplasm conservation.

The second in vitro method of germplasm conservation is cold storage. It is a slow growth germplasm conservation method. It conserves the germplasm at a low and non-freezing temperature (1 to 9°C). The growth of the plant material is slowed down in cold storage in contrast to complete stoppage in cryopreservation. Thus, it prevents cryogenic injuries. Long term cold storage is simple, cost effective. It yields germplasm with good survival rate. Virus free strawberry plants could be preserved at 10°C for about 6 years. several grape plants have been stored for over 15 years by using a cold storage at temperature around 9°C and transferring them in the fresh medium every year.

The in vitro methods of germplasm conservation has several limitations such as short-lived seeds, seed dormancy, seed- borne diseases, and high inputs of cost and labour. The techniques of cryo-preservation (freezing cells and tissues at -1960c) and using cold storages help us to overcome these problems.

Advantages and Limitations of Germplasm Storage

The in vitro methods of germplasm conservation storage have great advantage for clonally propagated crops and for crops having recalcitrant/short-lived seems. The potential advantages of these techniques are as follows:

(ii) Storage of germplasm free from diseases, insects and other pathogens, and weeds,

(iv) Reduced risk of errors in labeling, etc. In addition, such materials are ‘clean’ sources of ‘nucleus seed’,

(v) They are ideal for germplasm exchange.

However, these approaches suffer from the following disadvantages:

(i) Sophisticated facilities are required (particularly for freeze preservation and DNA cloning),

(ii) They demand a greater skill in handling and maintenance than the conventional techniques,

(iii) Even shoot tip derived plants may show genetic instability, at least in some plant species.

(v) Even DNA may become damaged due to cryopreservation under suboptimal conditions.

Slow-growth of plantlets ill vitro provides an attractive alternative to freeze preservation of germplasm as it is simpler, cheaper and very effective. Slow growth may be achieved by maintaining the plantlets either at a low temperature (4-9°C or Ca. 15°C) or on a medium having high osmotic concentration (e.g., 20% sorbitol or sucrose) or both.

In addition, the nutritional status of the medium may be lowered to restrict the growth of plantlets. Under the conditions of slow-growth, cultures may be attended to only once in several months. Its subculture may, be necessary only after long periods, once every 12-36 months.

For example, grape plantlets stored at 9°C need to be transferred after 12 months; they have been thus maintained for more than 15 years. It has been estimated that 6 replicates of 800 grape varieties can be maintained in only 2 m2 laboratory space, while it would require in the field.

The slow-growth approach is being utilized for germplasm conservation of specified root, tuber and tree species by the NBPGR, New Delhi. A National Facility for Plant Tissue Culture Repository has been created for this purpose. It has so far developed the slow-growth protocols for ginger, garlic, banana, sweet potato, etc.

The techniques for desiccation of SE s and for production of desiccated, artificial seeds are now becoming available. The desiccated SE s and artificial seeds can be stored at low (4°C) or ultralow (-20°C) temperatures for prolonged periods in a manner similar to zygotic seeds.

This approach is yet to be evaluated for such an application. It involves complicated desiccation procedures. It can be applied only to those species/genotypes where SE regeneration occurs in adequate frequency.

Germplasm can also be conserved in form of DNA segments cloned in a suitable vector, e.g., cosmids, phasmids or YACs. The technique is highly sophisticated, technically demanding and expensive.

Comparison of Three Approaches for in Vitro Germplasm Conservation