Hans A. Krebs first proposed a series of breakdown of pyruvate in the presence of oxygen, therefore the cycle is called Krebs Cycle. The cycle is also called citric acid cycle because formation of an important intermediate citric acid. krebs cycle takes place in the matrix of mitochondria. 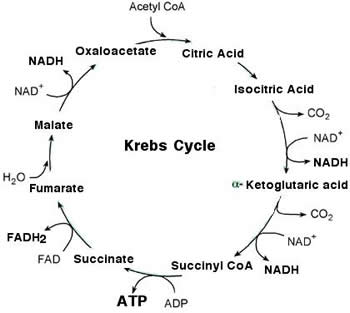 Entry of Pyruvate in to Mitochondria

Acetyl Coenzyme A (CO A) Formation

The pyruvate produced in glycolysis does not enter the Krebs cycle directly, rather it is decarboxylated in the presence of oxygen in a coordinated series of reactions catalyze by a multicomponent complex of several enzymes to a 2-C compound, acetyl Co A (CH3Co – CoA). The reaction requires participation of several coenzymes including NAD+ and coenzyme A (Co A). the enzyme catalyzing the reaction is pyruvic acid dehydrogenase. NADH2 is generated during the reaction. The overall reaction can be summarized as following:

The Krebs cycle starts with condensation of 2-C acetyl group (CH3CO) in acetyl coenzyme A with oxaloacetic acid (a 4-C acid produced during the cycle) and water to yield citric acid (a 6-C tricarboxylic acid). Enzyme citrate synthase catalyzes the steps.

Citric acid undergoes isomerization to Isocitric acid by enzyme aconitase. A molecule of NADH2 is produced during this step.

Up to this point three molecules of CO2 have been produced for each pyruvate, so complete oxidation of glucose has actually taken place. The remainder of Krebs cycle involves conversion of succinyl Co A to oxaloacetic acid to allow continued operation of the cycle. The following steps involved in the regeneration of oxaloacetic acid.

The oxaloacetic acid is produced is now able to react another acetyl Co A and continue the process the cycle.

The stepwise oxidation of each pyruvate in the Krebs cycle give rise to the following products.