have undulating radial walls.Epidermis has cuticular layer on the surface. This cuticle has variable thickness. The Walls of epidermal cells of leaves of the xerophytic plants undergo lignification. Deposition of silica also occurs in grasses and other plants. Epidermis of some plants has some specialized cells. These cells are guard cells, cork cells and silica cells. Some subsidiary cells of guard cells are also present.

Guard cells bound an opening called stomata. Stomata are generally abundant on the losser of the leaf. In certain xerophytic leaves, the epidermis is invaginated to form small chambers. Stomata are developed in these chambers. Epidermis of leaves also have different types of hairs or trichomes..These trichomes may.be unicellular or multicellular. 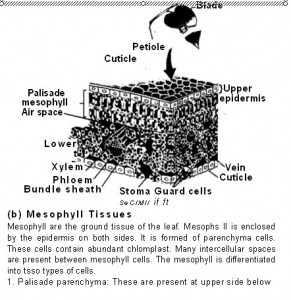 2. Spongy parenchyma: The spongy‘ parenchymas are present at lower side. They are almost isodiametric cells. They have abundant air spaces. The  presence of a large number of intercellular spaces allo‘%s the free exchange of gases. These spaces also increase the internal surface area.

The vascular system of leaf is present in the veins. Vascular system is continuous throughout the leaf. The Veins have Anastamosing

connections with each other. The main vein forms the midrib of the leaf. It gives narrow branches.

The petioles supply a single •large bundle to leaf. This bundle is arc shaped. The opening of arc is towards the upper side. The arrangement of xylem and phloem in a bundle is the same as in the stem. The ground tissue of the petioles is mainly parenchymatous. Sometimes, it has patches of sclerenclivina or collenchyma tissues. strengthening tissue of the leaves. Collenchyma and sclerenchyma ma are also present in bundle sheaths. They also act strengthening tissues.

The veins are parallel in monocotyledonous leaves. Their bundle sheaths extend to upper and lower epidermis. Some sclereids are also found in mesophyll tissues. Extensive fibers are found in some monocot leaves. Dieot km es form reticulate venation. These veins l brm network in the leaf.