Algae. The sequence of events through which an organism passes from zygote to zygote of the next generation is called its life cycle. Generally, five types of life cycles are found among sexually reproducing algae. 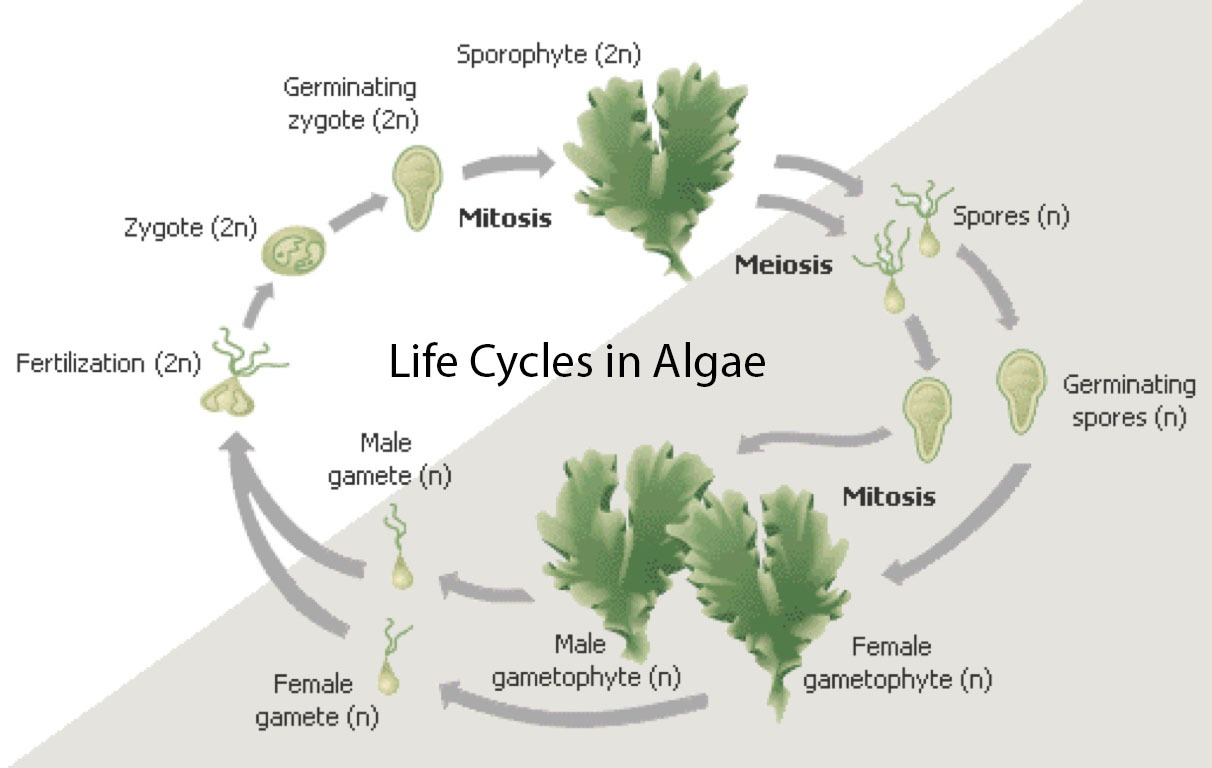 The life cycle during which the haploid phase is long and represents almost all the stages of the life except the diploid phase which is represented by zygote is called haplontic life cycle. A sexual haploid plant with only zygote diploid is called a haplont.

The haplontic life cycle is exhibited by most members of Chlorophyta where the main plant body IS haploid and reproduces by vegetative multiplication or formation of mitospores (spores formed as a result of mitosis). It reproduces sexually when the conditions become unfavorable for growth. The haploid gametes fuse to form diploid zygote which secretes a thick wall to form a resting zygospore. At the advent of favorable growing season, the zygospore nucleus undergoes meiosis to form meiospores which germinate to give rise to a new haploid plant.

This type of life cycle is exhibited by some members of Chlorophyta, all members of Bacillariophyta and some members of Phaeophyta. The vegetative plant body is a diploid sporophyte which bears sex organs in which haploid gametes are produced. The meiosis takes place before spore formation. The gametes unite to establish diploidy. The zygote divides mitotically to form a diploid sporophyte. In some species, both phases are morphologically similar (isomorphic), for example in Ulva and Ectocarpus, whereas in others the alternating generations are dissimilar (heteromorphic), for example in Fucus.

The life cycle in which there is a haploid and a diploid phase which alternate regularly with each other is called diplohaplontic life cycle. The plant having two cytologically different kinds of individuals that exhibit alternation of generations during its life cycle called diplobiont.

In this type of life cycle, the plants possess two distinct vegetative thalli with different chromosome numbers. One of these is haploid, reproduces sexually and known as gametophyte. The other is diploid, reproduces asexually and called sporophyte. Both generations alternate with each other regularly,

This type of life cycle can be explained with the life history of Polysiphonia. It is heterothallic gametophyte. The fusion of gametes results in zygote which divides by mitosis and develop into diploid carposporophyte which produces diploid carpospores. These spores develop into another diploid spore producing phase, the tetrasporophyte which produces haploid tetraspores. The tetraspores germinate into haploid gametophyte.

The life cycle in which there are two well developed haploid phases and the diploid phase is represented by zygote only is called haplobiontic life cycle. It is also called diphasic life cycle.

The haplobiontic life cycle is exhibited by some primitive red algae like Batrachospermum where plant body is haploid gametophyte which produces gametes, spermatia and ova. The zygote nucleus undergoes meiosis to produce four haploid nuclei and develop into another haploid plant, the carposporophyte that produces haploid carpospores. The carpospores germinate into a heterotrichous Chantransia stage. The erect filaments of this stage develop into haploid gametophyte.

2017-07-30
admin
Previous: Reproduction in Algae
Next: Economic Importance of Algae