Selaginella is a tropical plant. It has world wide distribution. It grows in damp forests. Some species occur in temperate regions. They grow in moist shady places.

The plant body is sporophyte. The body is divided into root, stern and leaves.

Rhizophore: Main stem develops leafless structures called rhizophore. Rhizophore grows downward. It develops adventitious roots at its tip. The rhizophore are intermediate in structure between the root and the stem. It is without nodes and intemodes.

Leaves: The main stem and the branches are covered by green leaves. Each leave has a ligule. The leaves are of two sizes, large and small. The leaves are arranged in four vertical rows. Leaves present in pairs. The larger leaf of each pair is attached toward, die ventral side of the stem and the smaller leaf towards the dorsal side. The leaves bearing sporangia in their axils are called sporophylls. Many sporophylls form cones or strobili.

Internal structure of the stem

In cross section, the stem is composed of epidermis, cortex and central stele.

1.  Epidermis: It is outermost layer. It is without stomata.

2.  Cortex: Cortex is present inner to the epidermis. It has many layered. It composed of parenchymatous cells. The cortex surrounds central stele. Cell of peripheral region of cortex contain chloroplasts. In mature regions of stem, the cortex form sclerenchymatous hypodermis.

3. Stele: Their stele is from monostelic to polystelic condition. Each
stele is protostelic in nature. The metaxylem forms the solid central core. The protoxylem groups on the periphery. The xylem core is surrounded by the phloem. Outside the phloem is the pericycle. It is composed of single layer of parenchymatous cells. The stele is separated from the cortex by a wide,air space. These spaces have long radiating cells called trabeculea. Trabeculea connect the stele with the cortex.

Internal Structure of the Leaf:

The leaf is covered by a single layered epidermis. The cells of epidermis contain chloroplasts. Stomata are present on the upper, or on the lower, or on both sides of the leaf. The mesophyll is formed of parenchymatous cells. These cells are loosely arranged and they have numerous intercellular spaces. Each cell contains one or more chloroplasts. Each chloroplast contains several pyrenoid-like bodies. The mesophyll is traversed by a single vein.

Each microsporangium contains several microspores. But them are only four megaspores in each sporangium. The mature spores are pyramidal in shape. The sporangial wall consists of three layers. The inner most layer is tapetum. They provide nourishment to the developing spores. A slit is produced in mature sporangia.The spores come out of this slit. 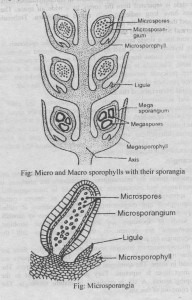 The development of micro and megasporangia is similar upto the formation of spore mother cells.

I. The development of the male gametophyte started within the microsporangia. Microspore divides into two unequal cells. The smaller cell is called prothalial cell. The larger cell is called the antheridial cell.

2. The prothalial cell does not divide further. Antheridial cell divides to produce 12 cells. Four cells occupy the centre. They become primary androgonial cells. These cells are surrounded by the remaining eight peripheral cells. The microspores are liberated from the sporangia at this 12-cell stage.

3. The outer eight cells form the jacket of the antheridium. The androgonial cells divide to produce a mass of 128-256 androcytes or antherozoid mother cells. Each androcyte develops into biflagellate antherozoid. The prothalial cell and jacket cells disintegrate and liberate the antherozoids in the surrounding water. 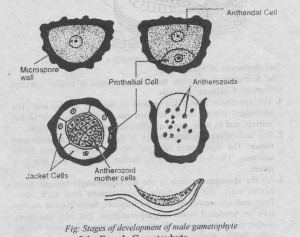 Development of the Female Gametophyte:

3.  The primary ventral cell divides to produces a lower egg or oospbere and an upper ventral canal cell. The surrounding vegetative tissue forms the wall of the venter. The ventral canal cell and the neck canal cells of mature archegonia disintegrate. They form a passage for the entry of antherozoids.

Development of the Embryo:

1.  The oospore divides into two cells. The upper cell enlarges. It is cilled suspensor. The lower cell is called the embryonal cell. It develops into the embryo. The suspensor pushes the developing embryo into the tissue of the gametophyte.

2.  The embryonal cell divides to form eight cells or octants. Two cells of the octants divide more rapidly. They produce an outgrowth called foot on one side. Foot is the chief food absorbing organ of the developing embryo. 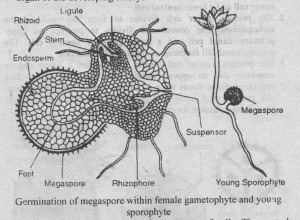 5.  Further growth of the apical meristem pushes the embryo out of the gametophytic tissue. Stem grows upward taking with it the cotyledonary leaves. The rhizophore grows downward and produces adventitious roots.

Selaginella shows a regular alternation of sporophytic and gametophytic generations. The vegetative plant is diploid sperophyte. It produces haploid micro and mega spores by meiosis. These spores give rise to male and female gametophytes. Gantetophytes produce male and female gametes. The gametes fuse to form diploid oospore. This oospore develops into the sporophyte.

Selaginella shows an evolutionary advancement over the other Pteridophyta. It has an approach towards seed habit due to following advanced characteristics.

1. The production of gametes, fertilization and the development of the embryo, take place on the sporophyte. Megaspore is never released from the sporophyte.

2.  Selaginella is heterosporous. The microspore produces the male gametophyte: It completes its development within the wall of the spore. 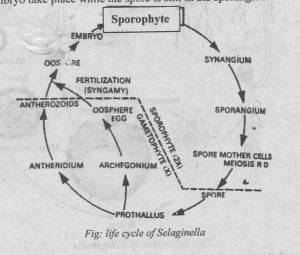