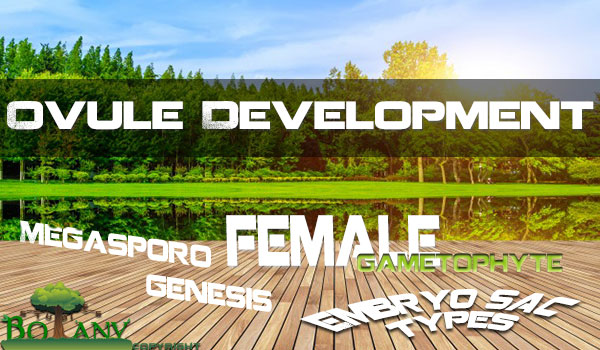 Ovule Development And Megasporogenesis in Angiosperms

Ovule development takes place by the appearance of primordium as a protuberance on the surface of the placenta. It grows into a conical structure with a rounded tip. This is the Nucellus or Megasporangium Proper.

From the base of the nucellus, one or two layers of tissue develop, which grow upward and form the integuments. In further stages of ovule development in angiosperm, the inner integument develops first than the outer one.

The rate of growth of integuments is faster than the nucellus, thus they enclose the nucellus completely except at the tip, forming Micropyle.

Megasporogenesis is defined as the formation of megaspores inside the ovule of seed plants. Usually, at the initiation of integumentary primordia, one of the hypodermal cells, called the Primary Archesporial Cell is differentiated.

The primary parietal cell sometimes, remain undivided and in certain cases divide periclinal as well as anticlinal to form a mass of Parietal Tissue which serves as nutritive tissue for the developing embryo sac 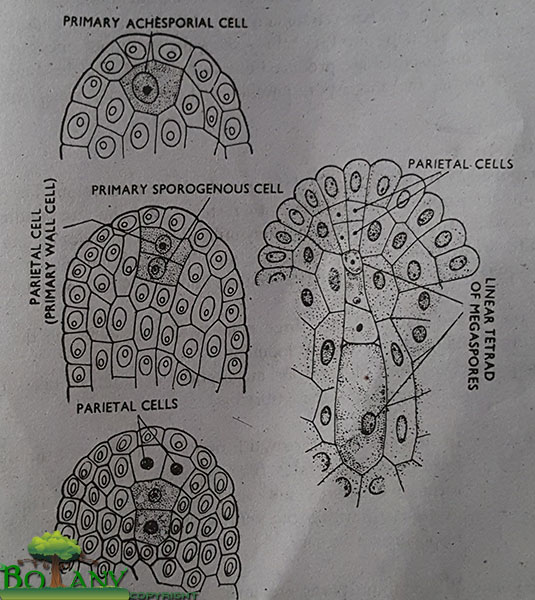 The primary sporogenous cell usually does not divide and act as Megaspore Mother Cell, directly. It divides meiotically forming a tetrad of Megaspores. Both the divisions are transverse therefore the megaspores are arranged in a line forming a linear tetrad.

In some cases, the tetrads may be T-shaped or Inverted T-shaped. The three upper megaspores degenerate and the lowest one, which is towards the chalazal end, develop into Embryo Sac. 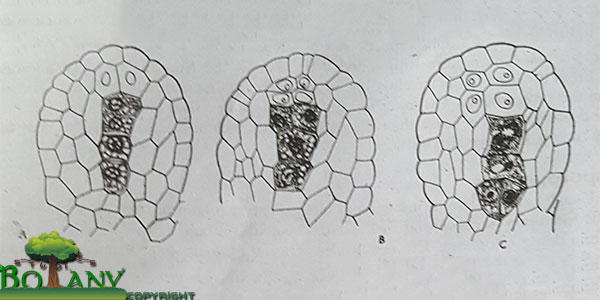 There are certain exceptions to the sequence of events mentioned above. In certain cases, i.e., Allium, the megaspore mother cell undergoes a single division and produces two megaspores.

The lower one develops into the embryo sac while the upper one degenerates. In Yucca, Iris, Caltha, three megaspores are produced due to the failure of one of the daughter cells to divide. In Lilium, Fritillaria, the megaspore mother cell directly transformed into a megaspore.

The Megaspore (n) is the first cell of the gametophyte generation. The megaspore increases in size into an Embryo Sac, utilizing other spores and the surrounding nucellar tissue.

There are three main types of embryo sac depending on the number of megaspores of the tetrad taking part in the development.

The nucleus of the megaspore divides into two, and the nuclei are separated from one another to the opposite poles, by the formation of a large vacuole between them. Each daughter nucleus divides twice, resulting in the formation of four nuclei at each pole.

One nucleus from each pole group migrates to the center. These are called Polar Nuclei. They unite to form the Fusion nucleus or secondary nucleus which is diploid. The three nuclei left at the micropylar end constitute the Egg Apparatus. One of them, which is away from micropyle, is the Ovum or Oospore, while the other two are Synergids or Help Cells.

They help cells are considered to help in the process of fertilization. The remaining three at the chalazal end of the embryo sac are organized into small, naked or thin-walled cells are known as Antipodal cells.

They usually degenerate, but in some cases, they are active and divide to form a tissue. They are supposed to be nutritive in function and supply food until the formation of the endosperm. 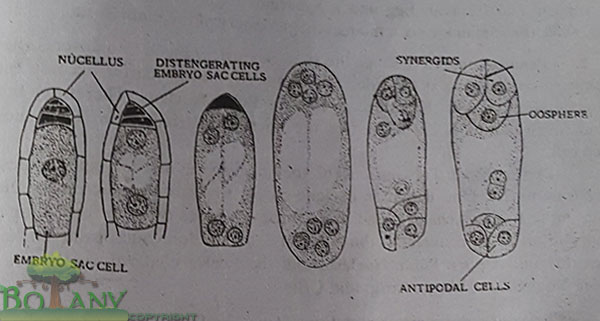