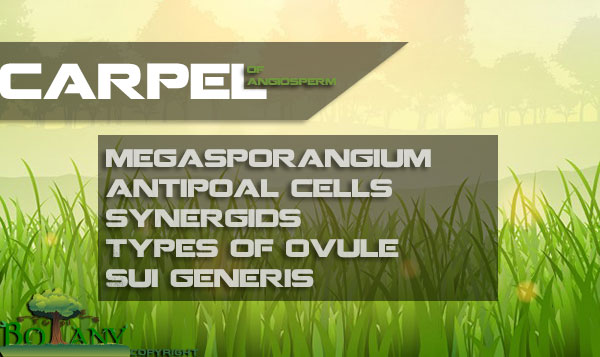 megasporophyll is an elongated appendage and is a modified folded leaf. The folding encloses Megasporangia (ovules) in a chamber, the locule. Carpel or megasporophyll are present in Gynoecium or pistil is the female reproductive whorl of flower consisting of one or more carpels or Megasporophll. Each carpel consists of three parts

2: Style slender projection of the ovary. The surface of the style may be hairy or smooth.

3: The swollen basal portion is termed as Ovary which may have one or many chambers. The ovary contains one or more rounded or oval bodies, the Ovules (Integumented megasporangia). The ovule contains a large oval cell called Embryo sac (Enlarged megaspore).

The number of carpels in each flower varies from one to many in different plants but this number is constant for families and serve as an important taxanomic character.

The angiosperm ovule or megasporangium has long been considered as a bud because sometimes a shoot develops from it; and because it was borne on placenta which was considered axial; because from it, as a seed, the axis of the new plant develops.

Megasporangium has more commonly been considered of folio nature – a sporophyll, a leaflet, a lobe of a leaf, the tip of a leaf, etc. Some are of the view that it is a “new structure”, an organ known as “Sui Generis”, a complete and independent organ inserted on the stem.

However, fundamentally, it is recognized as a structure that bears sporogenous tissue in which megaspore develops. The ovule is termed as an Integumented Megasporrangium. The nucellus is the  sporangium and the integuments are the protective structures. 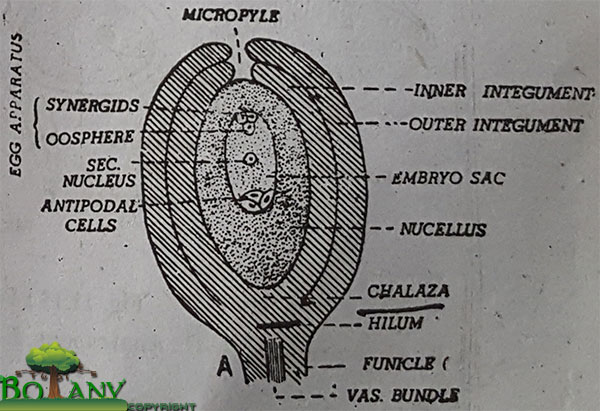 The ovules are borne in the ovary on a specialized tissue called the Placenta which is supplied by the poorly developed vascular tissue. Each ovule is attached to the placenta by a short stalk known as Funicle.

The funicle maybe long and curved, or short and stout. The long funicle maybe adnate to the ovule body forming a ridge, the Raphe. The place of attachment of the funicle with the main body of the ovule is termed as Hilum.

The main body of an ovule consists of a mass of sporogenous tissue called Nucellus which is surrounded, except at the tip, by two coverings or Integuments which arise as outgrowths from the chalazal end. The small opening left at the apex of the integuments is known as Micropyle.

In some plants belonging to gamopetalous families the number of integument is one. In certain cases, no integuments are produced e.g., in some parasitic families.

The two upper cells in this egg apparatus are called Synergids or Help Cells, While, third lower cell is the Egg or Oospore. In the center of the embryo sac a nucleus termed as Secondary Nucleus is present.

Types of Ovules In Angiosperms 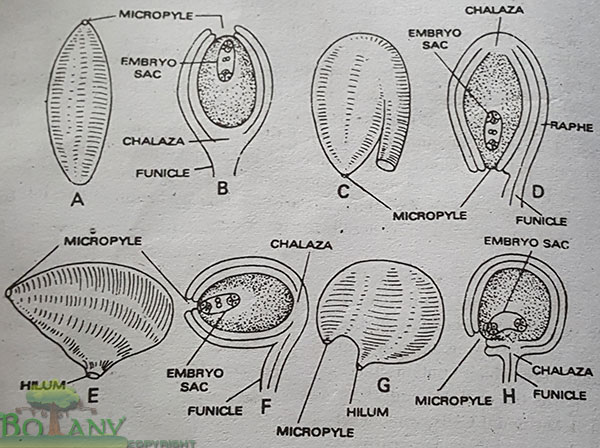 The ovule is orthotropous when it is straight and upright on the placental surface. The micropyle, chalaza and funicle, all are in a straight line, as in members of Polygonaceae. It is also called straight ovule.

The ovule is more or less bean shaped. The micropyle faces the placenta and is attached near the middle of the ovule. These types of ovules are found in the members of Cruciferae, Caryophyllaceae, etc. This ovule is classified by another name curved ovule.

In this type of ovule, the funicle is adnate to the ovule proper for about half of its length and the micropyle faces laterally. Therefore, the ovule is placed at right angles to its funicle. That’s why the amphitropous ovule is termed as transverse ovule.

The nucellus and the axis remain in the same line in the beginning but due to rapid growth on one side, the ovule gets inverted. This curvature continue till the ovule turns completely and once again the micropyle faces upwards, e.g., in Opunta.