Microspore And Pollination Process In Angiosperms 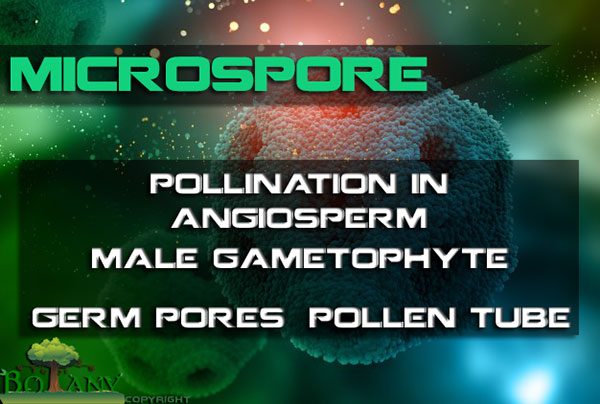 Microspore in angiosperm is a unicellular, uninucleate structure, possessing two coats, the outer exine, and the inner Intine and contains a large central nucleus and dense cytoplasm.

The exine is thick, cuticularized and tough layer and it is often provided with spinous outgrowths, warts or reticulations and sometimes smooth. The intine is a thin, delicate, cellulosic layer lying next to exine. The exine possesses one or more thin places called germ Pores through which the pollen tube grows.

The microspore germinates on stigma and forms a long tube known as the Pollen tube which transverse the style and reaches the embryo sac. The intine is a thin, delicate, cellulosic layer lying next to exine.

Mature pollen is made of different types of compounds including the fats, proteins, carbohydrates, ash, water. The chemical composition of pollen is a given below:

Structure And Types of Microspore

Their are different types of microspore different in shape and structure which are given below: 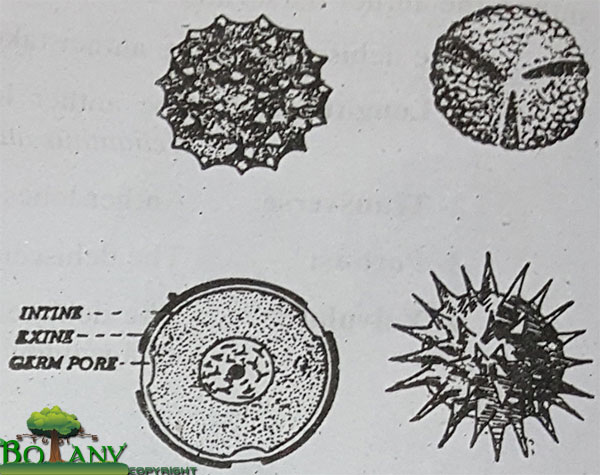 The microspore (pollen grain) is the first cell of the male gametophyte and is haploid. Germination of the microspore starts while it is still in the pollen sac. The nucleus is shifted to the periphery due to the development of a central vacuole.

The nuclei of the generative and vegetative cells differ in size, structure and in staining qualities. the nucleus of the vegetative cell is with a prominent nucleolus, the cytoplasm is rich in RNA and poor in DNA. Starch and fats are the conspicuous substances present as food.

On the other hand, the nucleus of the generative cell has a small nucleolus, the cytoplasm is poor in RNA (less strained), rich in DNA and poor in proteins.

Finally, the generative cell loses its contact with the sore wall and is shifted into the vegetative cell, where it may lie in any part of it. The generative cell is generally biconvex but in some cases, it is elongated. 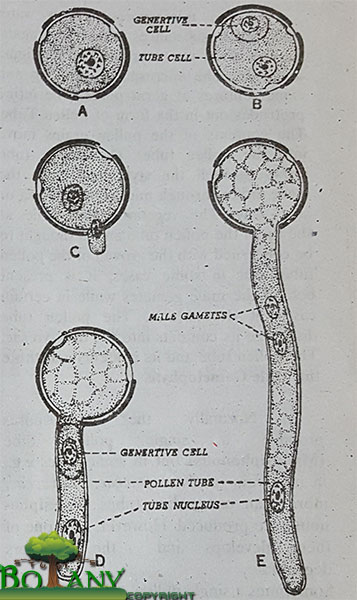 The transfer of microspore (pollen grain) from the anther to the stigma is called pollination. The pollination process is of two types; self-pollination and cross-pollination.

Self Pollination Definition: The transfer of microspores (pollens) from the anther of the flower to the stigma of the same flower is called self-pollination.

Cross-Pollination Definition: The transfer of the microspores from the anther of a flower to the stigma of another flower. The pollination is brought about through various agencies like the wind by insects, or by water.

Agents of Pollination In Angiosperms

The pollination process is carried out by three agents. These agents are also called pollinators.

Anemophilous: Pollination carried out by wind.

Entomophilous: Pollination carried out by insects.

Hydrophilous: Pollination carried out by water.

The stigma in different flowers is variously modified to receive the microspores. The surface of the stigma is usually papillate and glandular. The microspores are lodged among these papillae where they germinate and produce pollen tubes.

The microspores absorb water and other substances such as sugars, organic acid, etc., secreted by the stigma and style. The microspores swell up and exine ruptures at germ pores. The intine protrudes in the form of a Pollen tube. The contents of the pollen grains move into the pollen tube.

The pollen tube grows through the style and enters the ovule either through micropyle, chalaza or sideways. The vegetative nucleus lies at the tip of the pollen tube and is thought to be concerned with the growth of the pollen tube. But in some cases, it is present behind the male gametes while in certain cases, it degenerates. 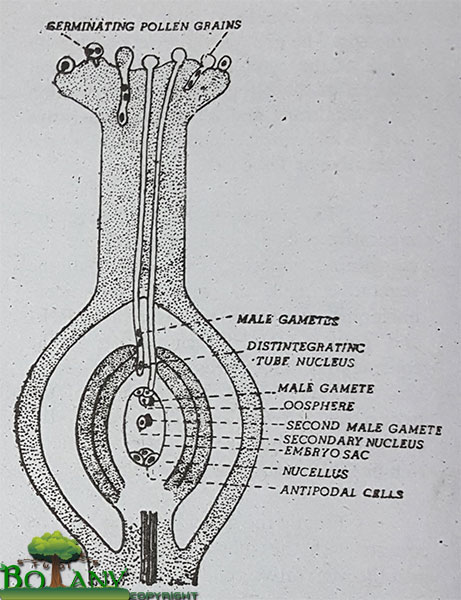 Normally the microspores produce a single pollen tube (Monosiphonous) but in some cases e.g., in members of Cucurbitaceae, Malvaceae, more Than one pollen tubes (Polysiphonous) are produced. However, only one of them develops and the others degenerate.

Read Also:- Megasporophyll And Types of Ovule In Angiosperms