The combination of the principles of population genetics and Darwinian evolutionary theory is called as modern synthesis. Modern synthesis comes from the study of genetics. It explains why variations exist among individuals. It also explains how they pass to the future generations. 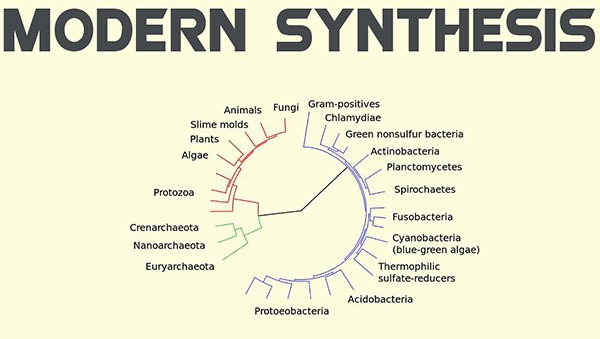 Some variations give an advantage to individuals. Therefore, nature selects them through natural selection. Thus, genetic variations are important in evolution. A large number of genetic variations can be produced in population. Even the simple principles of inheritance of Gregor Mendel provide for remarkable variation. Crossing over, multiple alleles, and mutations increase number of variation. Therefore. no two individuals are genetically identical. Chance produces different combinations of genes. Therefore, some individuals are better able to survive and reproduce in a given environment than others.

Modern evolution synthesis integrated the discoveries and ideas from many different fields. These fields are paleontology, taxonomy, biogeography, and population genetics. Thus, it is also called a synthesis.

The branch of biology which deals with the study of the distribution of species and ecosystems in geographic space and through geological time is called biogeography.

Population genetics is the study of genetic changes within populations and involves the examination and modelling of changes in the frequencies of alleles and genes in populations over time space.