The simulation of fertilization causes series of changes, not in the ovule but also in the wall of ovary. As a result, into these changes, the ovule developed into seeds while the ovary form the fruit. The fruit may be defined as ripened ovary containing seeds. The wall of the fruit is known as pericarp. 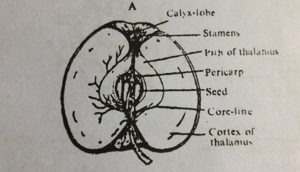 True Fruit: When the fruit is formed from ovary alone then it is called as true fruit.

False Fruit or Pseudocarp: Sometime other part of flower like thalamus developed into fruit and termed as pseudocarp. As in apple.

The fruit are classified into three main groups as simple, aggregate and composite.

A simple fruit arises from a single flower, in which the gynoecium is monocarpellary or polycarpellary and syncarpous.

These are dry or one seeded fruit which is indehiscent. Their pericarp when rip, does not split open to liberate the seed. They fall to the ground and the pericarp and testa rupture when the embryo began to grow during germination.

Following are the different type of achenial fruit.

Achene: The is derived from monocarpellary pistil with a superior ovary containing a single seed. The pericarp is membranous or leathery and free from seed coat or testa. As in buttercup.

Caryopsis: This is form of achenial fruit in which the pericarp and testa fused together. It is the characteristic fruit of grasses, cereals, maize, oat etc.

Nut: This is hard and woody pericarp which form a shell. It may be partially or completely surrounded by a hard or membranous structure called the capule, formed by fusion by bracteoles developed beneath the flower. It is characteristic of oak, hazel etc.

Samara: This is achene in which the pericarp develops a membranous outgrowth or wing which help the fruit in its dispersal by wind, e.g. Almond, ash etc.

Cypsela: It is developed from bicarpellary, syncarpous pistil with an inferior unilocular ovary. It is characteristics of Compositae. In many cases, the calyx forms a tuft of hairs or pappus at the top of the fruit, e.g., Sonchus. The pappus helps in dispersal of fruit by wind.

These are dry seeded and dehiscent fruit. Dehiscent means that their pericarp, when ripens, split open to allow seed to escape. 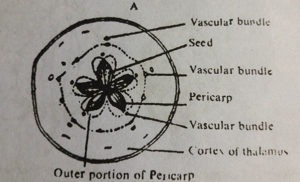 Legume: This is formed by monocarpellary pistils with a superior unilocular ovary. On ripening it dehisces along both its dorsal and ventral structure. It is the characteristic fruit of Leguminosae.

Follicle: This is formed by monocarpellary pistil with a superior unilocular ovary. But it dehisces along one structure only as it dries. As in larkspur.

Siliqua: It is a narrow cylindrical fruit formed from a bicarpellary, syncarpous pistil with superior ovary, having two parietal placentations. The ovary is unilocular at first but become bilocular due to the formation of false septum. When the fruit ripe the two walls of the loculi split away. The siliqua is the characteristic of Cruciferae.

Silicula: It resembles with the siliqua in all respects except that it is short, almost as long as broad and contain fewer seed, e.g., in Shepherd purse.

Capsule: This is derived from polycarpellary, syncarpous, superior ovary and may be unilocular or multilocular. However, some time it formed inferior ovary, as in Campanula, Iris etc.

The chief type of schizocarpic fruits are:

Lomentum: This is a legume or pot modified by the formation of false septum and constrictions between the seeds. Examples are found in Leguminosae.

Double Samara: They are derived from bicarpellary superior ovary. It breaks up into two mericarps, each of which contain one seed and is provided with one wing as in maple and Acer.

Carcerulus: This is developed from bicarpellary or polycarpellary, syncarpous superior ovary. The original few loculi is divided into several loculi by the formation of false septum. When fruit ripe, the loculi separate from each other as mericarps. As in found in Labiatae, Malvaceae.

Regma: This is derived from polycarpellary, syncarpous with a superior multilocular ovary, having a single seed in each locule. When ripe the fruit breaks up into a number of one-seeded parts known as cocci as in castor-oil plant.

There are three types of succulent fruits, Drupe, Berries, Pomes.

Drupes Fruits: The drops are derived from monocarpellary with superior ovary. They are generally one seeded, as in mango, peach etc. The pericarp shows three layers, the outer is epicarp fleshy mesocarp and inner hard layer, endocarp. Mesocarp form the edible portion of the fruit. The endocarp form the hard shell or stone which enclose one seed.

Berries: The berries are indehiscent, usually many seeded, fleshy or pulpy fruits. These are derived from superior or inferior ovary. In berries the epicarp form the outer skin, while the mesocarp and endocarp are succulent, forming the fleshy pulp in which the seed are embedded. As in brinjal, tomato orange, pepper, pomegranate etc.

Pome: This is the fruit of apple, pear etc. It is derived from syncarpous, bilocular ovary. The outer skin and edible portion of fruit is formed from thalamus, while the central core enclosing the seed are developed from carpels. The term epicarp, mesocarp and endocarp is not applicable to this type of fruits.

They are of following types:

Etaerio of Achenes: This is found in buttercup, strawberry and lotus. In buttercup, the achenes are all grouped together on an elongated thalamus.

Etaerio of Drupes: This found in raspberry and black berry. In these plants the number of small drupes are druplets, derived from separate carpels of flower which are grouped together on a conical thalamus.

Etaerio of Berries: This is found in sugar apple. A number of berries develop from separate carpels. They are embedded in the fleshy thalamus and become united during ripening. So, they seem to be simple fruit. 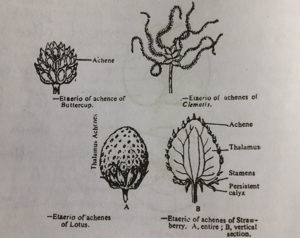 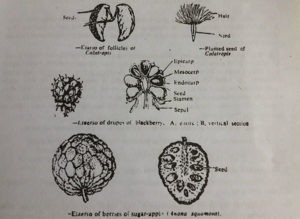 Types of Aggregate Fruits With Examples

A composite fruit is formed from whole inflorescence. These have following types:

Synconus: The composite fruit is formed from hollow, pear shaped form of capitulum called as hypanthodium. At the top of hypanthodium there is small opening which is guarded by scales. Just below the apical opening there is male flower, while the rest of cavity is covered by female flowers. When ripe, the receptacle of inflorescence becomes fleshy and formed the edible part of fruit as in peepal, fig etc.

Sorosis: This fruit is developed from female spike, e.g., mulberry, pineapple etc. The perianth leaves of female flower become fleshy and juicy and fuse together to form fleshy composite flower.

Strobilus: The composite fruit developed from cone like female inflorescence known as strobilus. The fruit are achenes which lies enclosed within the bracteoles and scales. As in Hop.