Leaf is principal appendage of the stem or on branches of a plant. They arise from nodes and bear lateral buds in their axils. A leaf is a chief photosynthetic organ of a plant. They are developed in acropetal succession and are exogenous in origin.

Each leaf consists of a green, flattened portion, the lamina; a petiole that raises the lamina to expose it to sunlight; and a leaf base, the part of the leaf through which it is attached to the stem. 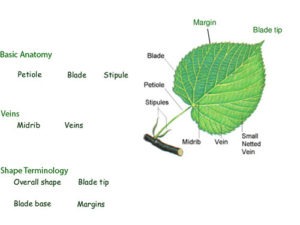 The following taxonomic terms are used to describe a leaf and its parts:

These are ordinary green leaves which carry on photosynthesis.

These are found in seeds and serve as food storage. They also absorb food from endosperms for the growing embryo.

These are small undeveloped leaves which are usually sessile and rarely green. Their function is usually protection. In scaly bulbs, as in lilies, they store food and become thick and fleshy.

The leaves of flowering shoots usually differ from ordinary leaves and are known as bracts. They maybe scale like or may be green. They bear one or more flowers in their axils.

These are specialized leaves which form the parts of flower. They are known as sepals, petals, stamens and carpels. They are arranged in thalamus.

Stipules are the paired outgrowth developed at the base of leaves.

Presence or Absence of Stipules:

Stipules are a pair of lateral outgrowths developed at the base of petiole of a leaf.

Stipulate: A leaf is stipulate when a stipule present, e.g., in Rosa indica (rose).

Exstipulate: When stipule is absent, the leaf is exstipulate, e.g., in Ipomea.

According to their form, color and size the stipules are classified into:

These are small, membranous and scaly and protect the young leaves in bud conditions. They drop of as the bud open, as in peepal.

These are large, green standing freely at the base of leaves, one on each side, as in cotton.

These are small and green standing freely at the base of leaves, one on each side, as in cotton.

These are fused laterally with the petiole and grow along its some distance, giving winged appearance, as in Rose.

The stipules fuse to form a single stipule. These lie between stem and petiole as in Victoria.

The large stipules fuse along their margins to form a hollow tube, the ochera. These surrounds the stem from the node up to certain height of internode. As in polygonum.

The stipules are modified into tendrils as in Smilax.

The stipules are modified into spines which act as protective organs. As in Zizypus jujube.

The attachment of the leaves to the stem or branches is called insertion.

Cauline: If the leaves arise on main stem, they are called cauline.

Ramal and Cauline: If the leaves arise both on main stem and its branches, they are ramal and cauline, e.g., in sunflower.

Radical: In certain cases, the stem arises from reduced stem present at the ground level or beneath the ground. These leaves are called radical, e.g., in radish (Raphanus sativus) and onion (Allium cepa). Such leaves usually forms a rosette.

The arrangement of leaves on stem is called phyllotaxis. It helps to avoid overcrowding of the leaves so that all the leaves may get the maximum light for photosynthesis. The phyllotaxis maybe: 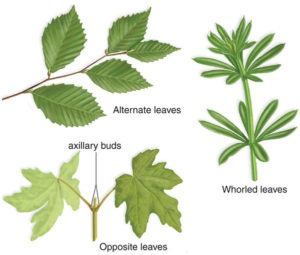 Alternate: When a single leaf arises at each node alternately, e.g., Hibiscus rosa-sinensis.

Opposite: When two leaves (a pair) are present at each node opposite to one another.

Opposite Decussate: If the pair of the leaves at any one node is at the right angles to leaves at node above and below, e.g., in Calotropis (Ak), Ocimum (Niazbo).

Opposite Superposed: If the opposite leaves at any one node are parallel to leaves at nodes above and below, e.g., Guava.

Whorled: When more than two leaves are present at each node forming a circle, e.g., in Oleander, Alstonia, etc.

The arrangement of veins and veinlets (vascular bundles) in the lamina of leaf is called venation.

Parallel venation may be:

Unicostate: If there is a single midrib in the lamina, the venation will be unicostate.

Multicostate: If more than one midribs are present in the lamina, then the venation will be multicostate.

In this type of venation there may be one or more midribs, from which smaller veins branch off which intermingle and form a network. It is characteristic of dicots.

Unicostate: When a single midrib is present in the leaf lamina, the venation will be unicostate, e.g., in Mango, Peepal, etc.

Multicostate: When more than one midribs are present in leaf lamina, e.g., in Castor oil plant.

A leaf can be divided into two types:

When the leaf lamina is all in one piece, i.e. not divided into further smaller complete units. The margins of leaf may be incised to a greater or lesser extent in some cases, for example in Peepal.

A leaf in which the lamina is divided into number of separate leaf-like parts, the leaflets is a compound leaf. A compound leaf may be: 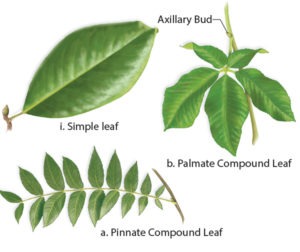 Peripinnate: In peripinnate, the number of leaflets is even, for example, Cassia fistula

Imperipinnate: In imperipinnate, the number of leaflets are odd, such as Rosa indica.

Similarly, a pinnate compound leaf may be:

Bipinnate: In bipinnate the leaflets are further divided into smaller units, the pinnules (Acacia).

Tripinnate: And if the leaflets are again further divided, they are called tripinnate, e.g., in Melia azedarach (dhrek).

If the leaflet fall very early, as in Opuntia.

If the leaf fall at the end of growing season, as in Delbergia sissoo.

If the leaf remains functional on the plant for more than one season, and the plant is called as evergreen, as in mango etc.

When a leaf stalk or petiole is present, as in peepal.

When the petiole is absent, as in poppy.

When the petiole is extremely small, as in Calotropis.

When the petiole has a small blade on its either side and has a wing like shape. As in Citrus.

When the petiole is inserted at or near the center of lamina, as in lotous.

In many plants the leaves are modified to carry out special functions. Some of the special modifications of leaves are as follow:

In many plants the entire leaf or part of leaf is modified into spines. It not only reduces transpiration but also act as protective organ. As in Berry.

The insectivores show a peculiar modification. In pitcher plant (Nepenthes) the leaf is modified into pitcher which serve to capture the prey.

In the bladderwort, the leaves are divided into segments, some of which modified into bladders. The bladder contains digestive glands and the leaf act as for capturing the insects. As in Bladder wort.

In some desert plants, the leaves are less developed, but the petiole becomes flattened. The shoot bear the flattened petiole and is termed as Phyllods. As in Australian Acacias.

Compound leaf leaf margins leaf parts Leaf Venation parts of a leaf and their functions types of leaf types of leaves and their names what is a leaf 2017-01-28
admin
Previous: Gymnosperms Study
Next: STUDY OF PLANT SEED-SEED HABIT