Morphology Of Plants – The Roots

The root may be defined as the cylindrical plant organ which is devoid of chlorophyll, bearing no buds or leaves, and tending to grow downwards away from light. It is covered at its tip by the root-cap it bears fine, delicate hairs, the root-hairs which absorb water from the soil. 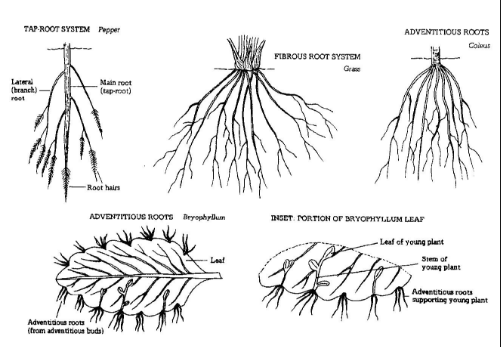 Roots may be classified into two main groups:

The root which is formed by the elongation of the radicle of the embryo in the seed is known as the tap-root.

Roots which arise from stems and even from leaves are known as adventitious. 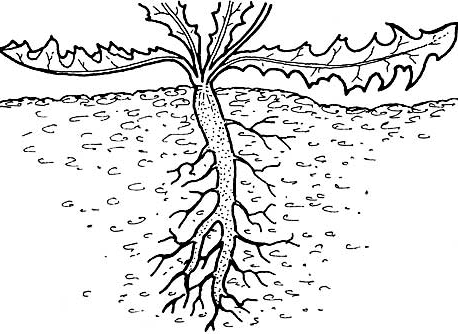 The tap root and its lateral branches, constitute thee tap root system. Usually the tap root continues to grow as long as the plant lives, and penetrates the soil to the considerable depth.

In many herbaceous annual plants, such as bean and pea, the tap root continues to elongate and give of slender branches, but does not become markedly thicker than its lateral branches. Such a long and somewhat slender tap root is known as fibrous tap root. Though this term is usually applied to some adventitious roots.

In the majority of leguminous plants, such as pea, gram. Medicago (Maina), etc, the tap root and its branches bear small swellings of nodules and are known as nodulated. The nodules contain certain bacteria which can fix atmospheric nitrogen to form nitrates. The nitrogen fixing bacteria provide the plant with nitrates and in return get protection from it by living in its roots.

If the tap roots are thick or swollen, containing reserve food, they are known as tuberous. Such roots occur in biennial plants, such as carrot, radish turnip and beet, and in many perennials plants, suck aks doc. Dandelion, etc. The biennials plants live for two seasons. In the first season, they produce leaves only and store up the surplus food in the tap root. In the following season, they utilize the stored food for the production of flowering shoots, after which they die. The conical tap root is swollen towards the upper end and gradually tapers towards the lower, as in radish and carrot. The fusiform tap root is spindle shape, swollen in the middle and tapering towards both ends as in English radish and English carrot. The napiform tap root is very much swollen above and abruptly tapers towards its lower end, as in turnip and beet.

The various forms of adventitious roots are as follow:

These roots arise from some part of the stem which is in contact with the soil. They may be fibrous or tuberous.

These are long and slender and are commonly developed on creeping and underground stems, as in grasses, ginger, etc.

These are swollen and fleshy, containing stored food material. They occur in Dahlia, Sweet Potato (Ipoemoea batatas) and many Orchids in isparagus. Dahlia and sweet Potato a number of roots of the root system remain fibrous, while others enlarge greatly to form tubers.

These are adventitious roots which are partly above and partly below the ground. They may be classified into stilt roots, prop roots and aerating roots.

In the maize, sugar- cane, bamboo and many palms, adventitious roots arise from the lower portion of the stem and grow obliquely down into the soil where they develop in the normal manner. These roots are known as stilt roots. They fix the plant very firmly to the soil and keep it erect.

These roots grow vertically downward in the air from which they absorb moisture. On reaching the soil they enter it and begin to absorb water and dissolve mineral salts from it. In course of time they become stouter and form props or pillars which support the branches. Such roots are known as prop roots.

Mangroves and some other plants grows in marshy places. The pneumatophores growing vertically upward forms underground root and projects above the surface of the soil. These roots are spongy in texture and have opening on their surface for the entrance of the air. They serve to aerate the parts of the plant which are embedded in the marshy (water-logged) soil.

These are entirely exposed to the air and carry on special functions. The are of two kinds, namely clinging or climbing roots and absorbing roots.

In ivy (Hedera helix), long pepper (Pipper longum) and certain other climbing plants, the stem develops numerous, short, adventitious roots which are known as clinging or climbing roots. These are sensitive to contact, and when they touch a suitable support they grab the support and stick with it.

The clinging roots usually secrete a sticky fluid which soon dries up in the air and thus helps in fastening the plant to the support, as in ivy. Sometimes they form disc-like structures at their apices, so as to ensure firmer attachment of the climber to the support.

In tropical rain forests, where the air is very moist, there are many kinds of epiphytes. These are small plants which perch upon the branches of trees and have no connection with the soil. They send out long adventitious roots which hang freely in the air and absorb moisture from it. In many epiphytic orchids, the absorbing aerial roots are covered with a dead, spongy tissue, known as the velamen. Which serves to absorb and store water.

In parasitic flowering plants, such as Cuscuta, short, thin, adventitious roots arise from the stem of the parasite at points where it comes in close contact with its host. These roots are known as parasitic roots or haustoria. They penetrate into the stem or branches of the host and become connected with its conducting tissues. Thus, they absorb water and manufactured food from the host and pass it on to the stem of the parasite.

In many water plants clusters of fibrous adventitious roots arise from the stem and dangle in water. These roots are usually without root hairs.