Morphology of Plants – The Stem

The main stem is the portion of the primary axis of the plant which develops from the plumule axis. An axis, together with the leaves which it bears, is called a shoot. A branch is also a shoot, for it consists of an elongation axis or stem with its own set of leaves.

The part of a stem from which a leaf arises is called a node, while the region between two successive nodes is known as inter node. 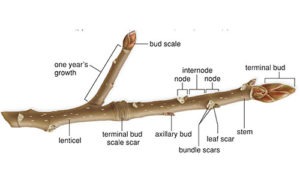 The flowering plants maybe classified into annuals, biennials and perennials according to their length of life.

Annuals: These live for only single growing season, after which they die. They produce seeds which, on germination develop into new plants the next year. Most herbaceous plants are annuals, e.g., poppy tomato, wheat, rice, etc.

Biennials: These live for two growing seasons. During first season, they develop leaves on short stems and store up food in their tap roots. The leaves die away at the end of season. During the following season the stored food is utilized for the production of flowers and fruits, after which the plants die, e.g., radish, turnip, carrot, etc.

Perennials: These live for several years, and usually produce seeds annually. All woody plants and some herbs are perennials.

The following descriptive terms are used for the description of stems.

Herbaceous: Soft and green can be easily bent or broken as in Brassica, Poppy, etc.

Wood: Hard in texture. Some stems are herbaceous above and woody below, e.g., Brassica, Calatropis (Ak);

Fistular: Internodes hollow, as in Bamboo.

Solid: Not hollow, as in most trees.

Jointed: Swollen at the nodes, as in Grasses, Sugar-cane etc.

Angular: Having alternate ridges and furrows as in Oscimum basilicum (Niazbo).

Glaucous: Surface smooth and more or less shiny, bluish-green, as in Bamboo.

Glabrous: Surface smooth but not shiny, having no fine hairs, as in Brassica.

Succulent: Thick and fleshy as in Opuntia and Euphorbia royleana (Danda Thore).

Spiny: With spines or thorns on the surface, as in Duranta, Acacia etc.

Prickly: With prickles (spine like) on the surface, such as Rose.

The stem maybe aerial or underground.

The aerial stems grow above the ground and are exposed to the air. They may be reduced, erect or weak.

The climbers develop relatively weak and slender stems which cannot grow erect. They climb up the support either by coiling around it or by developing special organs by means of which they become attached to it. According to their modes of climbing they are divided into.

The twining plants have long slender stems with long internodes. They do not develop any special organs for climbing, but their main stem and branches coil or twine round the support.

The direction of the twining movement of the stem-apex, looked from above, may be clockwise (from left to right) as in hop or counter-clockwise (from right to left) as in Convolvulus (Karari), Ipoemoea (Ishq Pecha), bean and Cuscuta.

These plants develop long, slender structures known as tendrils, by means which they climb up the support. The young tendrils are sensitive to contact. When an apical portion of the tendril touches a support. Its twines round it. The whole tendril then becomes coiled into a spiral.

These climbers attach themselves to the support by means of small adventitious roots which arise from the side of the stem where it comes in contact with the support. Such roots are sensitive to contact. They penetrate into the cracks or the crevices of the supporting stems of the trees, and usually produce a sticky fluid which on hardening fixes them to the solid objects, as in ivy (Hedera helix) and pepper (Pipper). Sometimes they are large, and clasp rounded the support, as in orchid vanilla.

These plants scramble up by wards by producing numerous hooks on their long, slender shoots which either rest on support or weave themselves among the branches of more rigid plants., e.g., Blackberry, Raspberry and Bougainvillea.

In these plants the stems spreads out along the ground to expose their leaves to sunlight. Stem lying close to the throughout their length are known as prostrate as in Tribulus terrestris (Bhakra) Solam xanthcarpum (Mamoli).

Suckers may also arise from adventitious buds on the roots, as in raspberry, rose, plum, cherry, poplar, willow, Delbergia sissoo (Sheesham), etc. In the poplar, willow and Delbergia, the suckers may develop from the roots at the long distances from the main trunk.

In many perennial herbs, which live from year to year, part or whole of the stem grows underground, these underground stems are often thick and swollen because of the food material (commonly starch) stored up in them.

The underground stems resemble roots but can be readily distinguished from the latter by the presence of (1) nodes and inter nodes, (2) scale leaves with buds, and (3) by the absence of root cap at the growing apex. Moreover, they arise from buds in the axils of leaves. 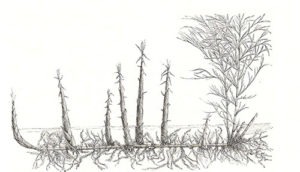 There are four principal types of underground stems, namely, the rhizome, corm, bulb and stem tuber. 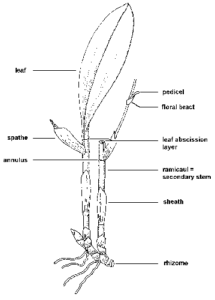 Difference between Rhizome and Root:

The rhizome superficially look like roots, but they can be distinguished from the latter by following distinctive features: 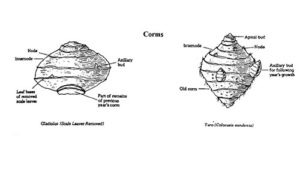 In these bulbs, the bases of the foliage leaves store up for food and become thick and fleshy. The inner fleshy leaf-bases completely enclose one another in a concentric manner, while the outermost leaf bases, which do not contain stored food, dry up to form a membranous covering or tunic. The tunic protects the bulb against drying up and mechanical injuries. Tunicated bulbs are found in the onion, garlic, tulip etc.

The potato tuber consists of several inter nodes, bearing small scale leaves at the nodes. In the axils of the scale leaves are groups of lateral buds called ‘eyes’, which are situated in small depression. Each group of bus represents a lateral branch with undeveloped inter nodes. At the unattached  end of the tuber there is also an eye, which in reality represents a terminal branch an apical bud.

Some stems are so highly modified that they do even not look like stems. This is due to the fact that they perform functions widely different from those of ordinary stems. Their stem nature, however, can be distinguished by their position, mode of development and internal structures. Some of these specialized stems will now briefly be described.

In many weak-stem plants the shoots are modified into slender, thread like structures known as tendrils, which are highly specialized climbing organs. The tendrils are often branched and may be leafless or may bear small-scale leaves. They are sensitive to contact. When the apical part of a tendril touches a suitable support, it twines around it, and then the whole tendril form a spiral which, like a wire-spring, draws the plant closer to the support.

In some plants growing in dry hot places true leaves are reduced to scales to prevent loss of water by transpiration, while the stems are flattened, green and leaf like, and perform the function of a leaf. Such leaf like stems are called phylloclades (if they are composed of more then, one internode) or cladodes (if they consist of a single internode).

Phyllocladodes are found in Opuntia, Ruscus, certain Euphorbias and numerous cacti, all of which inhabit dry and sunny places. Cladodes occur in Asparagus which is also a desert plant.

In Opuntia, the plant body consists of flat, green, fleshy phylloclades, each of which consists of a large number of internodes. In the butcher’s broom (Ruscus), the phylloclades are green flat and leaf-like. Each phylloclade arises in the axial of a small, linear scale-leaf which usually falls off, leaving a small scar.

In many plants growing in dry hot places the axillary branches or sometimes the apices of the main shoots stop growing after sometime and become hard and sharp pointed. These are known as stem spines or thorns. They can be easily recognized as stem structures, by the fact that they occupy the position of the buds and sometimes bear leaves and flowers. Frequently the leaf which bears a spine in its axial falls off, leaving a scar at the base of the spine.

The flower is a specialized shoot which arises in the axial of a leaf called the bract. The enlarged tip of the stalk of the flower, which bears floral leaves (petals, sepals, etc.), is called the thalamus or torus. The floral leaves are modified foliage leaves.

The general and special functions of the stems may be briefly stated as follow: