Online Mycology Course MCQs for NTS, MCAT, NUST and all other universities are available on botanystudies.com. Students can now prepare their exams easily by studying these important MCQ questions. On the flip side of the coin, the content table is included with phylum groups and examples. 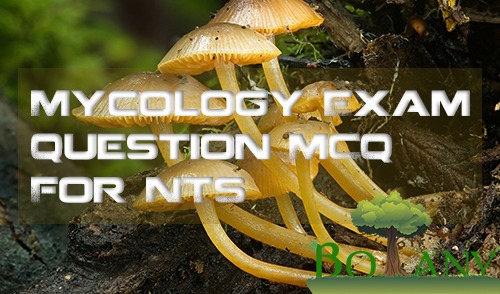 Fungi include eukaryotic, multicellular, heterotrophic organisms that have absorptive method of nutrition.

More than 100,000 species are included in the kingdom fungi.

The ecological role of fungi as decomposers is like bacteria.

Most fungi are decomposers that live on organic material. Here they secrete digestive enzymes and absorb small organic molecules which are produced by digestion.

Plant like characters: of fungi are: Cell wall, No centrioles and non-motile.

Animal like characters of fungi are: Heterotrophic, Glycogen as reserve food material and no cellulose in their cell wall and contain chitin. Chitin is present in the exoskeleton of arthropods. Mycology Exam Question MCQ

During nuclear mitosis the nuclear envelope does not break.

Some fungi are unicellular such as yeasts.

The body of a fungus is known as mycelium. The mycelium consists of hyphae.

Normally pores are present in the septa of hyphae. (Example: Penicillium)

A single mycelium may produce up to one kilometer new hyphae in one day.

Armillaria is a pathogenic fungus which badly affects conifers.

All fungalopo nuclei are haploid except for diploid zygote that forms during sexual reproduction.

Fungi store surplus food usually in the form of lipid droplets or glycogen in the mycelium.

Fungi are of different types according to their mode of nutrition. They may be saprotrophs (or saprobes), parasites, predators or mutualists.

Most fungi are saprotrophs or saprobes. These are decomposers that obtain their food (energy, carbon and nitrogen) directly from dead organic matter.

When a spore germinates normally Rhizoids are formed first, then stolons and finally sporangiophores.

Rhizoids are for: Fixation, secretion of enzymes and absorption of food.

The saprobes (saprotrophic fungi) generally decompose the cellulose and lignin which are the main components of plant cell walls. Most bacteria cannot break these two materials.

Saprophytic fungi, along with bacteria, are the major decomposers of the biosphere. They help in the recycling of elements (C, N, P, O, H etc.) used by living things. Online Mycology Course Questions

Some fungi are parasites. They absorb nutrients directly from the living host cytoplasm with the help of special hyphal tips called haustoria.

Facultative parasites can grow as parasite on their host as well as on the artificial growth media.

Some fungi are active predators. They are animal trapping fungi which can capture animals and use them as food.

Some species of Arthrobotrys trap the soil nematodes by forming constricting ring.

The association in which there is the benefit to the both partners is called as mutualistic symbiotic association.

Lichens are mutualistic and have symbiotic associations between certain fungi and certain photoautotrophs.

The fungi are mostly Ascomycetes and imperfect fungi and few Basidiomycetes (about 20 out of 15000 species of lichens). The photoautotrophs are either green algae or a cyanobacterium, or sometimes both.

Most Of the visible part of lichen is fungus and algal part is present within the hyphae.

Fungus protects the alga from strong light and desiccation and gets food from the alga.

There are three growth forms of lichens: (i) CRUSTOSE LICHENS: These lichens grow tightly attached to the rocks or tree trunks etc. Example is Lecanur. (ii) FOLIOSE LICHENS: they are leaf – like. Example is Parmelia. (iii) FRUTICOSE LICHENS: They are branching. Example is Ramalina. Online Mycology Course Questions

Mycorrhizae are mutualistic associations between certain fungi and the roots of vascular plants. There are two main types of mycorrhizae: Endomycorrhizae and Ectomycorrhizae.

Ectomycorrhizae are mostly formed with pines and firs.

About 95% of all kinds of vascular plants form mycorrhizal associations.

In Mycorrhizal association Fungi supplies inorganic (minerals and water etc.) to the plant and the plant supplies organic carbon to the fungal hyphae.

Most fungi reproduce asexually as well as sexually. However imperfect fungi has no sexual reproduction.

Spores are a common way of reproduction in fungi.

Spores may be produced by sexual or asexual process. However they are haploid and non-motile.

Spores are produced inside the reproductive structures called sporangia. The sporangia cut off from the hyphae by complete septa.

Conidia are non-motile, asexual spores produced in chains’ or clusters at the end of modified hyphae called conidiophores.

The mycelium of some hyphal fungi breaks into fragments and each fragment gives rise to a new mycelium.

Budding is an asexual asymmetric division in which tiny outgrowth or bud is produced which may separate and grow.

In fungi the processes of sexual reproduction is highly variable but two things are common which are: Fusion of haploid nuclei and meiosis.

During sexual reproduction, the hyphae of the two genetically different but matched mating types come together. Now first of all their cytoplasm fuse and then nuclear fusion occurs. The fusion of cytoplasm is called as plasmogamy while the fusion of nuclei is called as karyogamy.

Out of the three main groups of fungi, in two groups (Basidiomycetes and Ascomycetes), karyogamy does not take place immediately after plasmogamy. However the two haploid nuclei from the two individuals (which are genetically different) may coexist and divide in the same hyphae for most of the life of the fungus. Online Mycology Course Test

When meiosis occurs in the zygote, different groups of fungi produce different types of haploid sexual spores (such as basidiospores and ascospores). These spores may be produced by their typical structure/fruiting bodies such as basidia/basidiocarps and asci/ascocarps.

Ascomycota is the largest group of fungi, including over 60,000 species. (About 50% occur in lichens and some, such as morels, are mycorrhizal).

Hyphae of Ascomycota and Basidiomycota are septate,

The ascospores are haploid sexual spores.

Commonly 8 ascospores are produced inside each ascus.

The Spores (teliospores) of Ustilago tritici (loose smut of wheat) are produced on wheat ears.

Deuteromycota / Deuteromycetes / Imperfect fungi is heterogenous group includes all such fungi in which sexual phase has not been observed.

In parasexuality (in Deuteromycota) the portions of chromosomes of two nuclei lying in the same hypha are exchanged.

In Penicillium conidia are produced in chains at the tips of special hyphae called conidiophores, which are branched and brush-like.

Fixation (by Rhizoids) is the Structural adaptation of Fungi to live on Land.

Cytoplasmic flow throughout the hyphae is responsible for their rapid growth and spread.

Hyphal cell wall is thick and is formed of chitin. It is more resistant to decay than are cellulose and lignin found in the plant cell wall

The spores and conidia are thick walled and are non-flagellated. They do not require water for sexual reproduction.

Many fungi are more tolerant (than are bacteria) to damage in hyperosmotic surroundings.

Many fungi can tolerate temperature extremes from —5oC to 50oC or more. Therefore molds (e.g. Penicillium) can grow on oranges and jelly kept in a refrigerator, while generally bacteria cannot.