Origin of First Plant Cell on Earth (First Prokaryotic cell) happened about 1.7 billion years ago. Up to 700 MYA (Million Years Ago), life remained fairly primitive; the distinctions between plants and animals were not very clear-cut. For example, bacteria (monera) show a variety of forms. Some take in chemicals and depend on atmospheric CO2, like plants (autotrophs). Others take in organic material for food, like animals (heterotrophs). Some autotrophic bacteria, called chemosynthetic, do not need light; they obtain their energy from mineral chemical reactions, such as the conversion of sulfur to sulfate or the production of CH4. 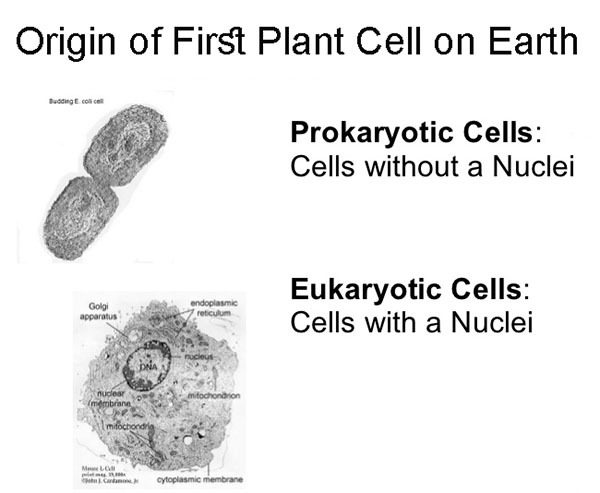 Among the multitude of micro-organisms. Two bacteria become the major components for the further development of the living world. The mitochondria are the sites of the principal oxidation reaction linked to the assembly of ATP, which supplies energy to most of the organisms today. Their closest relative among present-day bacteria have been identified to be the alpha-proteobacteria. The chloroplasts are the agents of photosynthesis in unicellular algae and plants. They store the solar energy in the form of glucose (sugar), which becomes food for the “heterotrophs”. Their present-day relative are the cyanobacteria (formerly known as blue-green algae), which is believed to be responsible for the first generation of atmospheric oxygen. The chloroplast supply food and oxygen for the heterotropic organisms, which in turn produced CO2 for photosynthesis. This ecocycle generates a lot of atmospheric oxygen today.

First organisms were appeared about 3.8 billion years ago. At that time, there was no free oxygen. It was a “reducing atmosphere” composed of methane, carbon dioxide, ammonia, and hydrogen. The microorganisms of this period utilized methane or hydrogen rather than oxygen in their metabolism. Therefore, they are called as “anaerobic” (non-oxygen-using).

Then evolution took another step toward complexity about 1.5 billion years ago. The bacteria acquired a nucleus and advanced to eukaryotic cells (protista). Subsequent fusion with mitochondria generated cells ancestral to those of animals and fungi. Acquisition by cyanobacteria in yet another round of fusion launched the photosynthetic protists and plants.

It was against this background the green algae emerged as the ancestral to the first plants. There are single-cells, colonial, filamentous, and multicellular green algae. Algae are grouped according to their pigmentation (green, golden brown, brown, and red) and biochemical differences, such as the chemistry of the cell wall and the chemical compound used to store excess food. Comparison shows that all the major organelles in the plant cell are already in place in the green algae. The green algae also have some of the same characteristics as plants. All types of plant life cycles are seen in this diverse group. For example, the multicellular Ulva shows the alternation of generations life cycle in the same way as terrestrial plants. Since the diplontic life cycle involves the fusion of two gametes, the green algae must have learnt about sex already. Actually, sexual reproduction took a long time to evolve, it started about I .2 billion years ago.

Plant cells are more complex than those of either animals or fungi. They have both mitochondria and chloroplasts. The first real plants to evolve are mosses, often found in close association with fungi. From the time they invent a cooperative lifestyle as lichens. Today, plants and fungi have a very close association. It may even be that the first plants are a genetic fusion of the two. Ninety percent of plants have fungi called mycorrhizal (root fungus) living in special co-evolved compartments inside their roots or in the soil. They intertwined with roots, making food for each other according to specialty and recycling wastes.

It took a long time for plants to develop proper roots and vascular system for land dwelling. These carry water drawn through roots to all parts of their bodies – as well as taller, stiffer bodies that can evolve into ferns and trees. They would evolve ways of reproducing in the absence of water. They develop ovaries, producing ova, or eggs that are fertilized by pollen and develop into embryos within protective bodies. Plants depend on insects for reliable transfers of pollen, while wind, birds, and other animals scatter their fertile

By the Ordovician period, shallow sea covered large areas of the world. Then the primitive plants such as Boiophyton Pragense had begun to adapt themselves to life on the relatively dry land. Boiophyton had already developed a stiff stem to ‘hold it upright against gravity. It was vascular. It had developed a system of vessels or tubes to carry water through its body.

Many Devonian plants were seedless. Fern bear interesting traces of their origins. They produce no seeds but rather spore cells that fall to the soil and grow into a peculiar intergeneration plant that is not a leafy fern but a specialized fungus-like form that produces egg cells and sperm cells. Propelled by its whip-like tail, the sperm must swim a short distance through the water of moist soil to fertilize an egg cell from a neighboring plant. The fertilized egg then grows into a mature fern that produces more spores. It is as if the fern is an amphibian plant, growing on land but reverting to water to transmit its gametes.

2017-11-01
admin
Previous: Survival of the Fittest Charles Darwin
Next: Difference Between Terrestrial and Aquatic Ecosystems