It occurs in wide variety of habitat. It is common in fresh water, damp place, ditches, drains etc. it is also found as patches on the mud surface. It is most common in moist places where abundant organic matter is present. Patches of entangled masses of filaments are often found, floating on the surface of fresh water channels/ 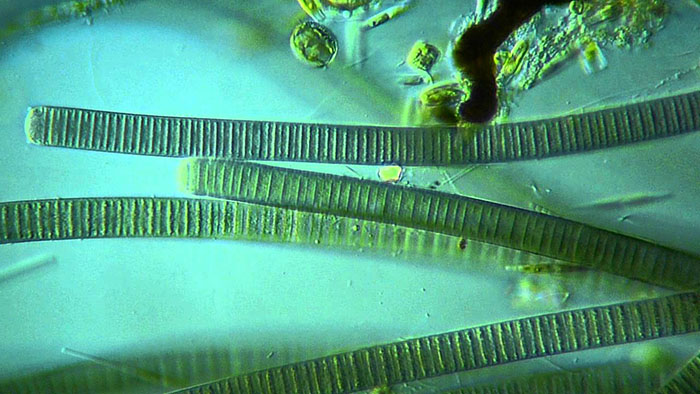 The thallus consists of free living trichome. It has distinct filamentus texture. The trichome consists of a single row of cells. The filament is unbranched and gelatinous sheet is very thin. The cells are cylindrical but broader than long. All the cells are similar in shape except the apical one, which is convex at the top. The septa are faintly visible and marked by row of granules.

All the cells in trichome are similar in structure. The cells are without any mitochondria, endoplasmic reticulum and Golgi bodies.

Each cell has a well-developed cell wall. The cell wall is being stable and hardly any mucilaginous sheath external to it.

Plastids are absent. The pigments are found in the flattened sac like structure called lamellae. The lamellae are not organized into grana. Cells are blue in color due to the presence of phycocyanine (a blue pigment), chlorophyll, carotene and phycoerythrin.

A definite nucleus is absent and nuclear material is present as central body, which lacks nucleolus.

Sometime the pseudo vacuoles are also present in the protoplast of certain species.

The characteristic of Oscillatoria is the slow rhythmic but active movement of the trichome. The movement is jerky pendulum like. This type of movement is termed as oscillatory movement.

The growth of the trichome is intercalary. The division is right angle to the longitudinal axis. This result in the increase in the length of trichome, which is never more than one cell wide. The cell divides by amitotically. 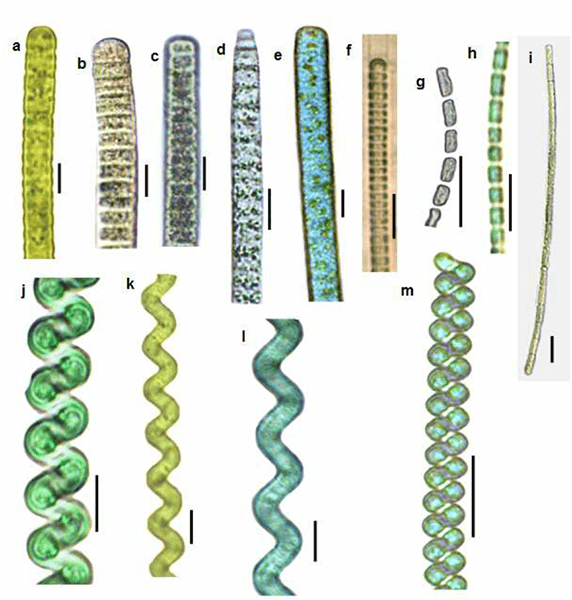 The filament breaks into two or more fragments. Each fragment grows to produce new plant body.

Oscillatoria reproduce vegetatively. The only method of reproduction is the formation of hormogones. The break takes place where a dead cell is situated.

During the growing season, the cell in the trichome collapses. The protoplast is change into mucilage. The mucilage filled cells are called necridia. The dead cell loses its turgidity. The mutual pressure on the wall of adjacent cell released. They become convex so that the dead ceil appears biconcave. The cells are separated in the form of hormogones from the dead cells.