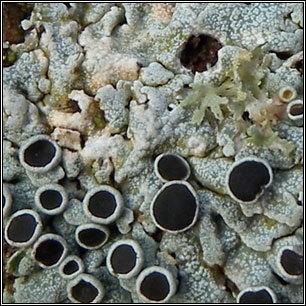 Physcia is foliose lichen. Physcia is divided into four regions internally. These regions are:

1. Upper cortex: It is present at the upper regions. It is composed of closely packed hyphae. Spaces are absent between them. if spaces are present, they are filled by gelatinous material. The upper surface may be smooth or it has hair like structures. These hairs are formed by scattered hyphae above the cortex.