Growth can be defined as an irreversible increase in dry mass of living material. It actually reflects an increase in amount of protein which has been synthesized, therefore the process of protein synthesis forms the basis of growth. 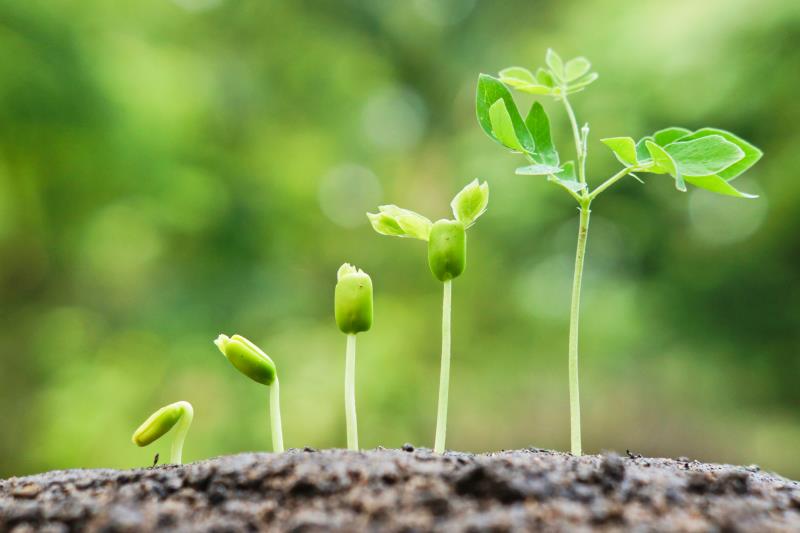 Starting with an individual cell, growth of a multicellular organisms can be divided into three phrases:
Cell Division: An increase in cell number as a result of mitotic division and cell division.
Cell Elongation: An irreversible increase in cell size (length or volume, or both) as a result of uptake of water that results in cell wall growth or the synthesis of living material that brings growth in volume.
Cell Differentiation: The specialization of cells, i.e., process by which cells undergo biochemical and structural changes to perform specialized functions.
However, each of these processes can occur at separate points in time. For example, increase in cell number without increase in volume occurs in cleavage of zygote and similarly, increase in volume not accompanied with cell division also occur as in region of cell elongation in root and shoot tips of plants.
Changes at the cell level bring about changes in overall form and structure, both of individual organs and of the organisms as whole. This process is known as morphogenesis (morpho = form + genesis = origin), i.e., the development of form or shape of cells and organs.

Plant growth is restricted to certain specialized zones. These zones are called meristems and are composed of cells having thin walls, prominent nuclei, small vacuoles. Such cells are called meristematic cells. The meristems are permanent embryonic tissues and are responsible for primary and secondary growth.
There are two types of meristems:
Apical Meristems: These occur at the tips of roots and shoots.
Lateral Meristems: These are present away from the apices among permanent tissues of the plant body, for example vascular cambium present as cylinder of meristematic cells in woody stems and roots.

Generally two types of growth are recognized in plants:
Primary Growth: The growth that occurs at the tips of shoots and roots and in lateral appendages like leaves and buds is called primary growth. In most plants, primary growth is equivalent to growth in length.
Secondary Growth: The stems and roots of many plants also increase in diameter, and this is termed secondary growth. It occurs in regions that have stopped elongating.
Similarly, growth may be determinate or indeterminate:
Determinate Growth: Some plant structures grow to a certain size and then stops growth and undergo senescence and death. This type of growth is called determinate growth.
Indeterminate Growth: The plant structures that grow by meristems and grow more or less indefinitely, for example vegetative stem and root. This growth is called indeterminate growth.

As the organisms grow from the zygote, they not only increase in volume but also in weight, cell number, amount of protoplasm and complexity. Two principal methods are used to measure the growth features:
Volume: The increase in size is often calculated by measuring the expansion in one or two directions such as length, height, width, diameter and calculating the area of the volume where possible. Volume measurements by displacement of water have the advantage that they can be non-destructive hence, the same plant can be measured at different times.
Weight: The increase in weight is often measured by harvesting the entire plant or a part of plant and weighing it before too much evaporates from it. This gives us the fresh weight, i.e., weight of the living tissue. A fresh weight is somewhat variable as it depends upon the plant water status. Therefore, measurements of dry weight are more appropriate. The dry weight is commonly obtained by drying the freshly harvested plant material for 24 to 48 hours at 70 to 80 °C.

On the basis of growth, the plant species may be monocarpic or polycarpic.
Monocarpic Species
The plants species that flower only once and then die are called monocarpic species (Gr. mono = single + carpic = fruit).
Monocarpic species may be annuals, perennials or biennials.
Annuals: Some monocarpic species live for one growing season. These species are called as annuals. They usually germinate from seeds in the spring, grow during summer and autumn, produce flower and seeds and die before winter, e.g., spring wheat and rye.
Biennials: Other monocarpic species live for two growing seasons. These species are called biennials. These plants germinate in the spring and spend the first season as a vegetative rosette of leaves that die back in late fall. The plants overwinter as roots with its reduced shoot comprising of meristem surrounded by protective dead leaves known as perenating bud. During the second growing season (summer), the apical meristems form stern cells that elongate (bolt) into a flowering stalk, the scape. The common examples of biennials are beet (Beta vulgaris), carrot (Daucus carota) and henbane (Hyosyamus niger).
Perennials: Many monocarpic species live for more than two growing seasons, these are called perennials. For example Bambusa spp (Bamboo) live for more than half a century vegetatively, then these flower withers and die.
Polycarpic Species
The plant species that flower, return to vegetative mode of growth and flower at least once more before dying are called polycarpic species (Gr. Poly = many).
Polycarpic do not convert all of their vegetative meristems to reproductive meristems. These grow and reproduce for many growing seasons, therefore all are perennials. Shrubs and trees (woody perennials) utilize only some of their axillary buds for the formation of flowers and keep the terminal buds vegetative. In some cases, the terminal buds produce flowers while the axillary buds remain vegetative. Thus, these plants save at least one type of bud for vegetative growth.

About hundred years ago, a German botanist Julius von Sachs proposed that chemical messengers are responsible for the formation and growth of different plant organs. He called 5hese organ forming substances within a plant.
Later work suggested that instead of specific organ forming substances, plants  contain substances that trigger or initiate biochemical processes, which in turn, lead to organ formation or other aspects of growth. The first such chemical messenger was identified in 1930s named auxin.
Five major classes of these chemical messengers have been identified so far in plants. These are auxins, gibberellins, cytokinins, ethylene and abscissic acid (ABA). With the exception of ethylene, all have carbon ring structures of varying degree of complexity. Auxins and cytokinins contain nitrogen whereas the giberellins and abscissic acid are composed of carbon, hydrogen and oxygen.
These substances commonly known as plant hormones (phytohormones) or growth regulators initiate biochemical reactions and changes in chemical composition within the plant.

The term hormone was developed by animal physiologists to denote an organic substance that is effective in low concentration and synthesized in one part of the organism and transported to another part of the organism where it produces a characteristic physiological response. The properties and behaviour of certain plant substances was sufficiently similar to an animal hormone, therefore the term plant hormone or phytohormone was used.
Plant hormone does not fit the model of animal hormone. In plants, all metabolically active cells appear capable of synthesizing hormone under appropriate conditions. The hormones must be synthesized by the plant, thus inorganic ions such as K+ and Ca++ that causes important response are not hormones. Similarly, organic growth regulators such as 2,4-D are auxin, synthesized in the laboratory is not hormone.
A hormone must be translocated  in the plant, but nothing is said about how or how far, nor does this mean that the hormone will not cause a response in the cell in which it is even synthesized. Sucrose is synthesized; translocated by plants, and causes growth at higher concentrations, but it is not considered a hormone.
Furthermore most plant physiological responses appear to involve combined effects of several hormones rather than a single hormone. In certain cases, the growth or differentiation is sometimes inhibited by hormones. Especially abscissic acid. Therefore, many plant physiologists use the term plant growth substances or growth regulators rather than plant hormones. It includes both endogenous (synthesized inside the plant) and synthetic substances.

The growth regulators can be classified into two categories, growth stimulators and growth inhibitors.
Growth Stimulators
The growth regulating substances that stimulate and promote the growth phenomenon in plants are termed growth simulators. These include auxins, gibberellins, cytokinins which regulates processes such as cell elongation, cell division, dormancy, flowering, fruit setting, senescence delay, etc. These are also responsible for growth responses such as phototropism and geotropism.