Plant Kingdom MCQs For NTS is recent article, if you put gaze on the following mcqs questions. The MCQs are divided into four parts. Starting from the system classification up to life cycle of Pinus with covering up Bryophytes, Liverworts, Psilopsida, Mosses, Sphenopsida. The students and candidates can prepare their exams by following schedule of Mcqs. 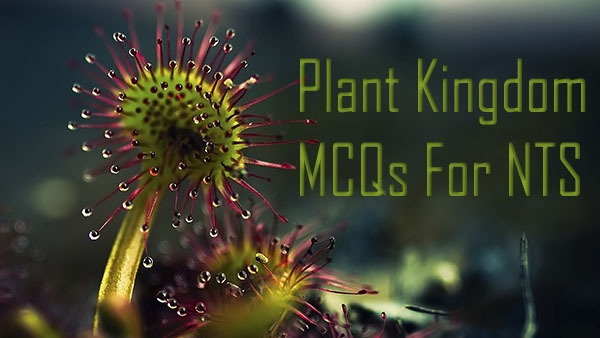 Bryophytes are flowerless, non-vascular homosporous Plants in which gametophyte is dominant while the sporophyte is attached to the gametophyte.

The bryophytes are also called the amphibians of the plants because they cannot live away from water and need water for reproduction.

The mature sporophyte of bryophytes generally consists of foot, seta and capsule.

Significance of alternation of generations is that it causes variation, adaptation and evolution.

Rhizoids are long filamentous extensions of the cells of lower epidermis.

Heterogamy (production of two kinds of gametes) is present in the bryophytes.

Bryophytes are divided into three sub-divisions which are Hepaticopsida (liverworts), Bryopsida (mosses) and Anthoceropsida (hornworts).

In bryophytes plant body is gametophyte.

The mature sporophyte (in the bryophytes) consists of a foot, a seta and a capsule.

Paraphyses are sterile hair present in the cluster of antheridia and Archegonia of the gametophyte of Bryophytes.

In mosses’, each spore (unlike that of liverworts) develops into an alga like structure, the protonema.

The spore on germination develops into a gametophyte.

In Marchantia Gemma cups are present which are involved in asexual reproduction. Plant Kingdom MCQs For NTS

Tracheophytes are called vascular plants because of the presence of vascular tissues (i.e., xylem and phloem).

There is Heteromorphic alternation of generations in all plants.

On the land there is Heteromorphic alternation of generations.

Large leaves having divided veins and veinlets with an expanded leaf blade or lamina are known as megaphylls.

Megaphylls are present in ferns and seed plants.

Three steps in the Evolution of Megaphyll are: Overtopping, Planation and Webbing.

The unequal development of various branches is called overtopping

The process of evolution of leaf was very slow and gradual. It was completed in more than 15-20 million years. Plant Kingdom MCQs For NTS

Lycopsids are not mosses but are called club mosses/spike mosses because of their club/spike-shaped strobile and small leaves (though with vascular tissue) which are like mosses.

In Sphenopsida the whole plant body is composed of a large number of joints. Therefore the plants of this group are also called as arthrophytes.

Sub division Pteropsida is divided into three classes which are Filicineae, Gymnospermae and Angiospermae.

Fern Gametophyte is also called Prothallus. Prothallus is advanced than a thallus.

When the frond is immature and young, it is coiled. This pattern of development is called circinate vernation.

Dryopteris, Pteridium, Adiantum and Pteris etc are examples of Ferns.

In Adiantum the stipe (stalk) and rachis of leaf are black, smooth and shiny. Therefore it is called maiden hair fern.

In the Fronds a group of sporangia is called sorus.

The size of the prothalluis is about one-third of an inch (8 mm) at its longest diameter.

Fern prothallus is monoecious i.e., male and female sex organs are present on the under- surface of the same prothallus.

In the mature prothallus, archegonia occur near the notch and the antheridia are scattered among the rhizoids.

Each antheridium of the Fern prothallus produces many spermatozoids which are spirally coiled and multicilliated. Plant Kingdom MCQs For NTS

A seed may be defined as a fertilized ovule or a seed is an integumented megasporangium having an embryo.

The integuments become the seed coats after fertilization.

Gymnosperms form about one-third of the world’s forests.

The pine is a conifer (Gymnosperm) and the conifers are heterosporous.

Heterospory means production of two kinds of spores; the microspores and megaspores.

The male and female pine cones are produced on the same plant.

A microspore of seed plants that contains the male gametophyte including the gametes is called a Pollen grain (Plural Pollen).

In Gymnosperms and Angiosperms the female gametophyte is also called an embryo sac.

Indian pipe is a parasitic angiosperm.

In Angiosperm the fertile leaves having ovules are folded and joined at the margins to form ovaries.

A flower is a modified shoot which consists of a pedicel, thalamus (or torus), and floral leaves.

When the pollination is over, the sepals usually and the petals always fall off.

The ovule consists of an integument (covering) having a tissue inside called as nucellus.

As a result of pollination, the pollen grain is transferred to the stigma. Here it germinates to form a pollen tube.

Double fertilization is only In Flowering plants (Angiosperms),

The integument of the ovule form testa and tegmen and ovary wall develops into the fruit wall. Plant Kingdom MCQs For NTS