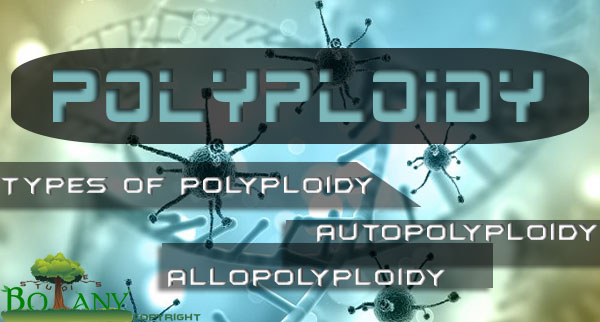 The polyploidy is infrequent in animal species, but is well known in lizards, Amphibians and Fish. The polyploidy is more common in plant species. Old number of chromosome sets are not usually transmitted reliably from generation to generation because a polyploid organism without an even number of homologues usually does not produce genetically balanced gametes. For this reason, tripIoids, pentaploids, etc., are not usually found in species that depend solely upon sexual reproduction for propagation.

Types of Polyploidy in Plants

The polyploidy can occur in two ways:

What is Allopolyploidy (Greek — allo — other or different) 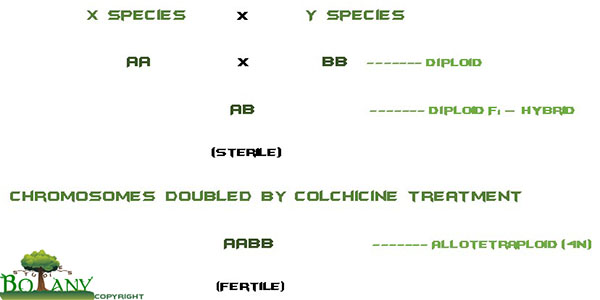 The distinction between auto – and allopolyploid is based on genetic origin of extra chromosome set.

What is The Difference Between Autopolyploidy and Allopolyploidy

(i) A failure of all chromosomes to segregate during meiotic division may produce a diploid gamete. If such a gamete is fertilized by a haploid a zygote with three sets of chromosomes is produced. (ii) Two sperms may fertile an ovum, resulting in triploid zygote. (iii) The triploids may be produced under experimental conditions by crossing diploids with tetraploids. Diploid organisms will produce gametes with n chromosomes while tetraploids will produce 2n gametes. Upon fertilization, a triploid will be produced.

Autotetrapioids are found in larger number than autotriploids because the autotetraploids have an even number of chromosomes, i.e., 4n, therefore, these will produce genetically balanced gametes as compared to those produced by autotriploids. Autotetraploids can be produced experimentally from diploid cell by applying cold or heat shock during meiosis. These can also be produced by applying colchicine to the cells undergoing mitosis. The colchicine interferes with spindle formation and the replicated chromosomes cannot migrate to the opposite poles. When such a cell will re-enter interphase, it will be converted to 4n.

While Allopolyploids result from hybridization of two closely related species. The hybrid produced will be sterile because of its inability to produce viable gametes. The new genetic combination may undergoes a natural or induced chromosomal doubling, and a fertile tetraploid is produced. The hybrid contains unique information as compared to either parent. Such an organism is called Allotetraploid.

Allopolyploidy is the most common natural form of polyploidy in plants because the chance of forming balanced gametes is much greater than in other types of polyploidy. Since two homologues of each specific chromosomes are present, the meiosis may occur normally and fertilization may successfully propagate the tetraploid sexually.

The allotetraploids usually exhibit characteristics of both the parental species. This can be noted in the hybrid resulting from a cross between the radish (Raphanus sativus) and the cabbage (Brassica oleracea). The hybrid consists of 9 Raphanus and 9 Brassica chromosomes (9R + 9B). The hybrids are almost always sterile, but some fertile autotetraploids (18R + 18B) been produced. Unfortunately, the root of this allotetraploid is more like the cabbage and its shoot resemble the radish. Therefore, this hybrid has no significant economic value. Had the converse occurred, the hybrid may have been of economic importance. This allotetraploid was named Raphanobrassica. 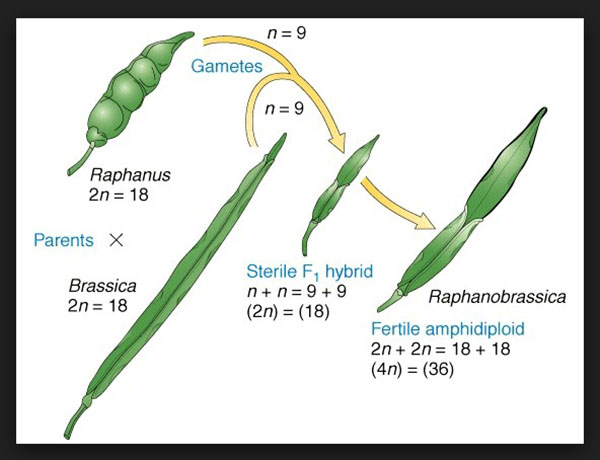 Evidence is available now that suggests that A, B and D genomes from three diploid species mentioned above are much different from, one another, so it is believed that three diploid progenitors of common hexaploid Wheat were derived from a common ancestor, For this reason the common hexapoloid wheat is now considered as an autopolyploid rather than an allopolyploid.

A much more successful commercial hybrid has been raised by crossing the grasses Wheat and Rye. Wheat (Triticum) has a basic chromosome number of 7. The diploid species have 14 chromosomes. Other cultivated autopolyploids exist as tetraploids (4n = 28) and hexaploids (6n = 42). Rye (Secale) also has a basic chromosome number 7. The only cultivated, species is diploid (2n = 14). When tetraploid wheat is crossed with diploid rye, and F1 hybrid was treated with colchicine, hexaploid hybrid (6n = 42) is produced. The hybrid designated as Triticale, represent a New Genus. Octoploids may also be produced from crosses between hexaploids wheat and diploid rye. But the hexaploid hybrid is more stable. Fertile hybrids can be crossed together or back-crossed to the parental varieties. These crosses have resulted in a wide variety of the member of the genus Triticale. 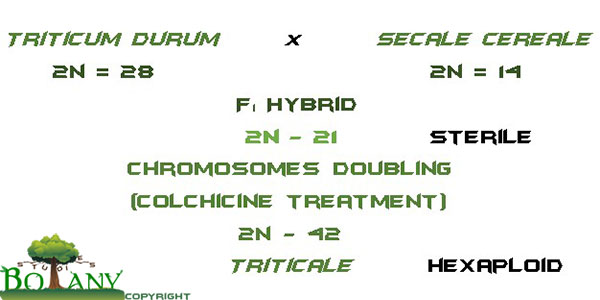 We can take both wheat and rye as an beneficial hybrid model in crop improvement. The hybrids demonstrate characteristics of both wheat and rye. For example, certain hybrids combine the high protein content of wheat with the high content of the amino acid lysine of rye. The lysine content is low in wheat and thus is a limiting nutritional factor. Wheat is considered a high-fielding grain, while rye is noted for its versatility of growth in unfavorable environments. Triticale combining both traits have the potential of increasing grain production.