Polysiphonia is a marine alga. It is present along the coast of oceans. It is attached to the rocks or other substratum. Some members are epiphytes. 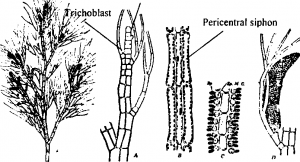