Precipitation And Its Types

Precipitation is the condensation of water vapors in the form of rain, hail, snow, etc. Precipitation (rainfall, snowfall) is the major source of soil moisture. All soil moisture is derived from precipitation. It is the driving force of the water cycle as well.

Precipitation begins as water vapor derived from the surfaces of oceans in the atmosphere which condenses to form clouds that upon the further cooling result in rain, snow, hail, sleet, and dew.

Precipitation directly or indirectly affects the plant life through atmospheric humidity and water content of the soil, therefore an important ecological factor. 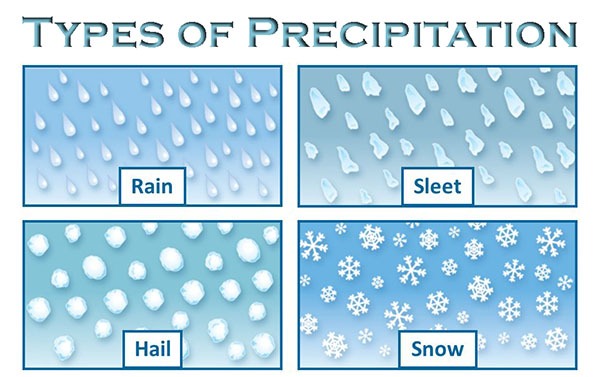 It is caused by eddies of warm air several hundred miles in diameter rising in vertical spirals about centers of low atmospheric pressure. These storms move easterly along the edge of cold polar air masses that cap both the northern and southern hemispheres. As the ascending mass of air in a cyclone rises it expands, mingles with cold air, and thereby is greatly cooled. Precipitation easily results from this phenomenon.

It is caused by the current of air rising over an elevation. Expansion and cooling is the basic cause of condensation here as with other types of precipitation. In general, rainfall of this type increases up mountain slopes only an altitude of about 3000 meters at the most.

This type of precipitation occurs in summer when the land surface becomes very hot. As the air next to the ground becomes heated its density decreases below that of the upper atmosphere. so that an unstable condition is brought about. Sudden violent overturns a result, and these often project warm air vertically to altitudes where it is chilled to condensation point and bring down the rain.

Snow: When condensation takes place under sufficient low temperature (below 32 F) the moisture released after condensation is frozen in the form of hexagonal crystals which join to form snowflakes.

Hail and Sleet: Sometimes the drops of rain become solidified into small and rounded solid pieces of ice when they pass through colder layers of the atmosphere. They reach the surface of the earth as hailstones. The falling snow or hail mixed with rain is sleet.

Rainfall: Clouds are composed of millions of tiny water droplets. When clouds become older the droplets coalesce to form larger drops of water. When some of the water particles reach a certain size, they fall out as rain. Rainfall is determined by geography and pattern of air movements.

This is why mountain slopes facing oceans get more rain and deserts are found on the other side of the mountain. Also, deserts are more common along the sea coasts where the wind blows from large interior dryland areas.

The total rainfall at any particular place is measured either in inches or millimeters with the help of instruments called rain gauges.

A simple rain gauge consists of a funnel with the vertical collar of at least 5 cm high around the rim of a metal funnel that delivers water into collecting reservoir. A calibrated stick can be inserted in the reservoir to measure the water collected, or the volume can be measured by pouring it out into a graduated cylinder and dividing the quantity by the area of the funnel.

Importance of precipitation to Plants

Snow may be injurious or beneficial to plants in several ways, such as:

The snow that melts at times when the soil is not frozen is a source of soil water. The gradual melting of snow feeds streams which supply water for irrigation purpose to arid regions.
Heavy snowfall followed by wind or rain may break off tree branches. Similarly, the weight of the snow burdens the vegetation.
At high latitudes and altitudes snowdrifts damage the vegetation growing on slopes.
Deep snow may press the seedlings down to the ground so that they may be attacked by fungus easily.

Rain is important to plants in the following respects:

Rain is of tremendous importance to plants as a source of soil moisture.
Rain helps to crack open thin-skinned fruits such as cherries, plums, and tomatoes when wetted to release the seeds.
The amount and distribution of rainfall determine the vegetational zones (deserts, subtropical forests, rain forests, etc.) of the world and the type of vegetation in them.

Hail and sleet are infrequent, therefore not considered as the source of soil water. But when they cause considerable temporary damage to the aerial parts of the plants.