Process of Genetic Modification in Plants 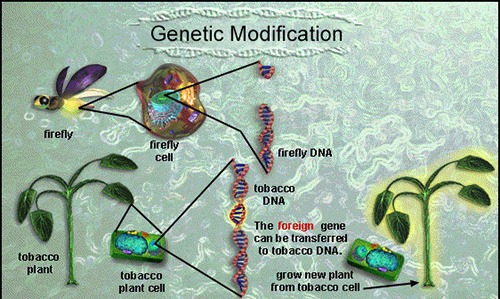 Types of Plants on the Basis of Genetic Modification

The plants are divided on the basis of their genetic modification are as follow:

Preparation of Genetic Construct the First Step of Genetic Modification

A genetic construct is designed so that the gene to be added will be expressed by the plant. A promoter to drive transcription and a termination sequence to stop transcription of the new gene, and the genes of interest are introduced to the plant. A marker for the selection Of transformed plants is also included. In the laboratory. antibiotic resistance is a commonly used marker. The plants that have been successfully transformed will grow on media containing antibiotics. The plants that have not been transformed will die.

Construct can be inserted in the plant genome by genetic recombination using the bacteria Agrobacterium tumefaciens. A. rhizogenes. or direct methods like the gene gun or micro-injection are also used. Plant viruses are also used to transfer gene into plants. But the technique is limited by the host range of the virus. For exatnple, Cauliflower mosaic virus (CaMV) only infects caulifloweer and related species.

The three main uses of GM are the production of insulin from bacteria. Production of erythropoietin in Ovary cells of a Chinese Hamster. Production of OncoMouse also known as “Cancer Mouse” from genetic modification for experimental research.