Process of photosynthesis is utilized by autotrophic organisms such as green plants, algae and cyanobacteria (photosynthetic bacteria). They use the photosynthesis process step by step in order to make their own organic nutrients from simple inorganic nutrients (water, carbon dioxide and minerals) and radiant energy. The radiant energy is converted into chemical energy of specific organic compounds, mainly sugars and starch, amino acids and lipids. Oxygen is released as by product. 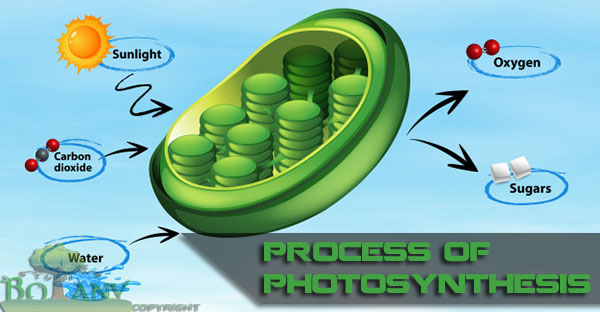 Photosynthesis Definition: In simpler terms, the process of photosynthesis is used by plants and other organisms to convert the radiant energy/light energy into chemical energy, that can be used to perform daily tasks. 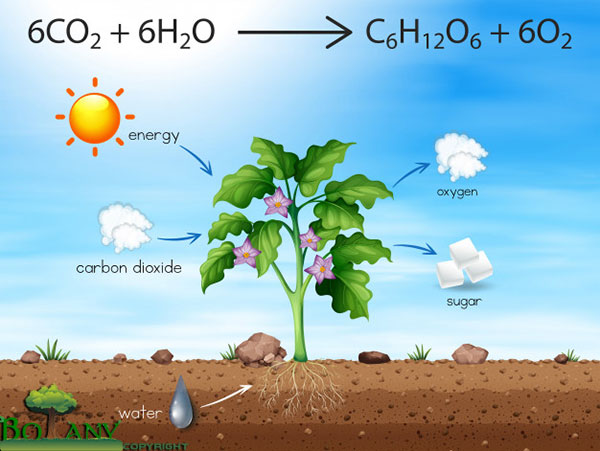 The process of photosynthesis in plants (green plants) takes place inside the cells containing chloroplasts. Most chloroplasts occur in the mesophyll cells of green leaves, but some are found in parenchyma cells below the epidermis of herbaceous stems. In the chloroplasts, the energy of sunlight is trapped in chlorophyll. The absorption of light energy by chlorophyll induces a rearrangement of the molecules electronic structure to an excited state, a process called photochemical excitation. The structure returns to ground state in approximately 10 – 9 seconds. The structure excitation in chloroplasts is responsible for oxidative change of water, a process called photo-oxidation; the reduction of nicotinamide adenine dinucleotide phosphate (NADP+) to NADPH, termed photo-reduction and phosphorylation of adenosine diphosphate (ADP) to adenosine triphosphate (ATP), a process known as photophosphorylation.

ATP and NADPH are utilized in the reactions of carbon dioxide fixation that are commonly referred the dark phase of photosynthesis since it does not require the presence of sunlight. In many plants, the carbon dioxide is almost exclusively fixed in the chloroplasts by combination with ribulose-1, 5-bisphosphate to produce 3- phosphoglyceric acid (3-PGA), which is converted to 4-C, 5-C, 6-C and 7-C phosphorylated sugars via a series of reactions collectively known as Calvin-Benson Pathway (Calvin Cycle). 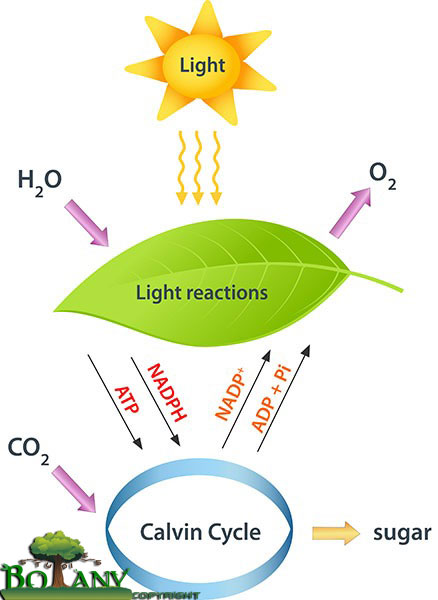 Origin of Oxygen in Photosynthesis

when this photosynthesis equation was compared with that for the green plants:

Niel observed an analogy between the role of hydrogen and water, and of oxygen and Sulphur. This led to conclude that oxygen released by plants is derived from water, and not from carbon dioxide.

In eukaryotes, the site of photosynthesis are sub-cellular organelles known as chloroplasts. The chloroplasts vary in shape, size from species to species. These arise from tiny immature, small, nearly colorless bodies called protoplastids found in the unfertilized egg cells. 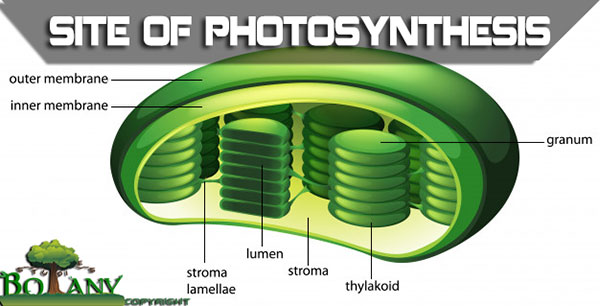 Those substance which absorbs light energy are called pigments. All active photosynthetic pigments that are involved in the process of photosynthesis are found in the chloroplast. These include chlorophylls (bacteriochlorophylls in bacteria), carotenoids and phycobiliproteins. Each of the pigments serves a specific function.

Carotenoids are lipid compounds that range in color from yellow to purple. These are found in nearly all higher plants. There are two kinds of carotenoids.

There are two common cartenoid pigments, Beta carotenen and xanthophyll.

Vertebrate animals oxidize the molecules of beta carotene taken in with food, each molecule yielding two molecules of vitamin A.

Xanthophyll has a very similar structure. It is described as an oxygenated hydrocarbon.

In red and blue-green algae, and in photosynthetic bacteria, a protein-pigment complex called biliproteins are found. These are phycocyanin and phycoerythrins. The pigment part of this complex is called phycobilin. It is strongly attached to protein and absorbs light in the range of wavelengths not absorbed by chlorophylls. The absorbed light energy is transferred to chlorophyll. Thus, like carotenoids the phycobilins are also accessory pigments.