Properties of population ecology Populations have many unique features. They have an ago structure, density, and distribution in time and space. They exhibit a birth rate, a death rate (mortality), and a growth rate. They respond in their own ways to competition, to predation, and to other pressures. Individuals make up a population affect one another in various ways. The relations of one population with another influence the structure and function of whole ecosystem. Properties of population ecology 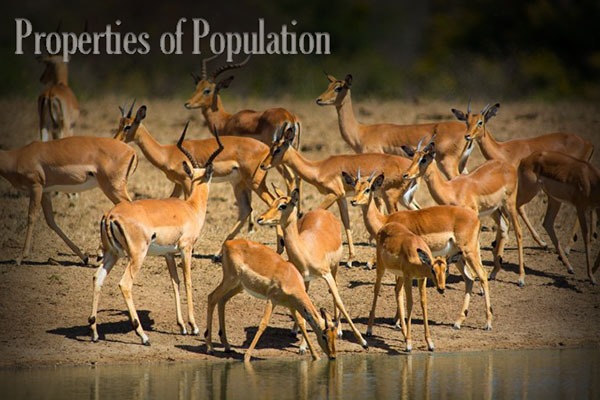 Although tree appears to be a unit, but it is a collection of buds, twigs, shoots, flowers and leaves above ground, and roots and their branches below the ground. These modules have their own birth rates, death-rates. and growth rates. These features also determine the form of the trees. Birth, senescence (aging) and death occur at the level of module as well as the whole plant. Therefore, it is difficult to study the life period of plants. On the other hand. the form, development, growth, etc., of animals can be predicted because most animals live as individuals. Properties of population ecology

Density is defined as “the number of individuals per unit area, per volume or per unit of habitat“.

Density affect individuals in populations, for example trees in crowded stands may grow more slowly, and some may die due to lack of water, nutrients, light, etc. The density of organisms in one area varies with the seasons, weather conditions and food supply. Total counts may be possible for some plants and large or conspicuous animals such as birds and butterflies.

The measure of the number of individuals per unit area is called crude density, and the density measured in terms of amount of area available as living space is ecological density.

Distribution refers to how organisms are dispersed over space.

Density affect how organisms are dispersed or distributed over space. Individuals of population may be distributed randomly, uniformly or in clumps.

Random Distribution: Individuals are distributed randomly if the position of each is independent of the other. For example, trees of the same species in the canopy layer may be spaced at random.

Uniform Distribution: Individuals distributed uniformly are more or less evenly spaced. For example, uniform distribution occurs among plants when severe competition exists for crown or root space, as among some forest trees.

Clumped Distribution: It is the most common type of dispersion. The individuals occur in scattered groups in this type of distribution, Clumping results from responses to habitat differences, daily and seasonal weather changes, reproductive patterns and social behavior. For example, populations of trees may be concentrated in longs bands of strips along rivers leaving the rest of the area unoccupied. Properties of population ecology

Dispersion patterns in a population is difficult and require careful sampling techniques.

The age structure of a population is “the ratio of the various age classes to each other at a given time”. Age classes can be specific categories such as years or months, or life history, such as eggs, larvae, pupae and instars.

Age distribution provides a valuable insight into the history of a population. Among plant species, age-class structure provides only a limited picture since the growth rates are indeterminate, i.e., not linked to age.

Natality is the birth of new individuals. The number of births per female of age x per unit of time is called birth rate.

Birth is the greatest influence on population increase. Like death, births are age-specific. Certain classes contribute more to the population than others. Natality in plants is complicated because they have both vegetative and’ sexual reproduction. Seed production and germination are true natality, because they produce new genetic individuals. Modular populations of clones – leaves, buds, and twigs exhibit their own “birth” rates.

To obtain a clear and systematic picture of mortality and survival, we can construct a life table. The life is simply an account book of death. Life tables for animals can be derived from data on mortality and survivorship. Life table for plants are more difficult to develop because plants have modular growth and two life cycle stages, germination and seedling development.

The rate at which a population change can be estimated from the net reproductive rate as determined from fecundity table. In an unlimited environment, populations expand geometrically or exponentially. Exponential growth, described by a J-shaped curve, is like compound interest. Such growth may occur when a population is introduced into an unfilled habitat. Natural populations rarely achieve a stable level. They fluctuate within upper and lower limits about a mean.

Read Also:- Study of Organisms and Their Environment

2017-12-11
admin
Previous: The Study of Interaction Between Organisms and their Environment
Next: Population Dynamics